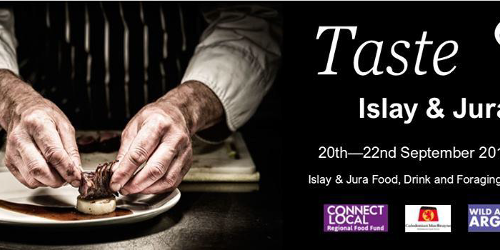 With support from CalMac Ferries, The Islay & Jura Tourism & Marketing Group launched a new event for 2019. "Taste Islay & Jura" a Food, Drink and Foraging Festival that took place 20-22 September. Over 35 businesses across Islay, Jura and Argyll were engaged and encouraged to take part throughout the weekend and utilise the brand imagery.

The highlight of the new event was the Saturday Producer's Market in Bowmore which attracrted 2,200 people. A market has been an ambition for some time for the island and feedback has been extremely positive with many asking for a more regular Saturday market for the island and congratulating the organisers on such a fantastic new event for Islay & Jura. 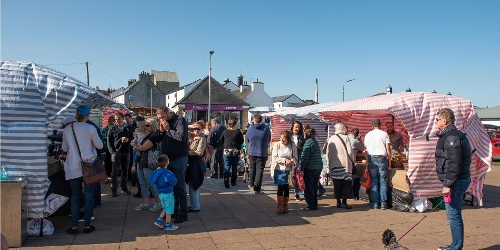 In total 21 stalls were in place for the market - with Calmac's support we were able to attract businesses from further afield with both the Isle of Mull Cheese and Argyll Coffee Roasters taking stalls at the market. Argyll Coffee Roasters now have their produce stocked in the highly reputable Bruichladdich Distillery shop and island B&B's. Ghillie Basan food writer, broadcaster and food anthropologist attended. Ghillie prepared locally sourced paired canapes during the market which were very well received, she later gave a talk about her new book Spirit and Spice. Chef Colin Hinds from the Kilted Lobster in Edinburgh also attended and gave his time free of charge to cook a magnificent lobster barbecue - comprising 100 locally landed lobster served during the market day. Adle Conn - the TartanSpoon food blogger also attended and was instrumental in sharing and promoting the event on her social media channels.

It is estimated that 2,400 attended events over the weekend. This is based on 2,200 counted at the market and 179 tickets sold for various events across the island for the festival. These are a combination of locals and visitors with an estimated 90% utilising the CalMac ferry service.