Climbing Amongst The Clouds of Arran 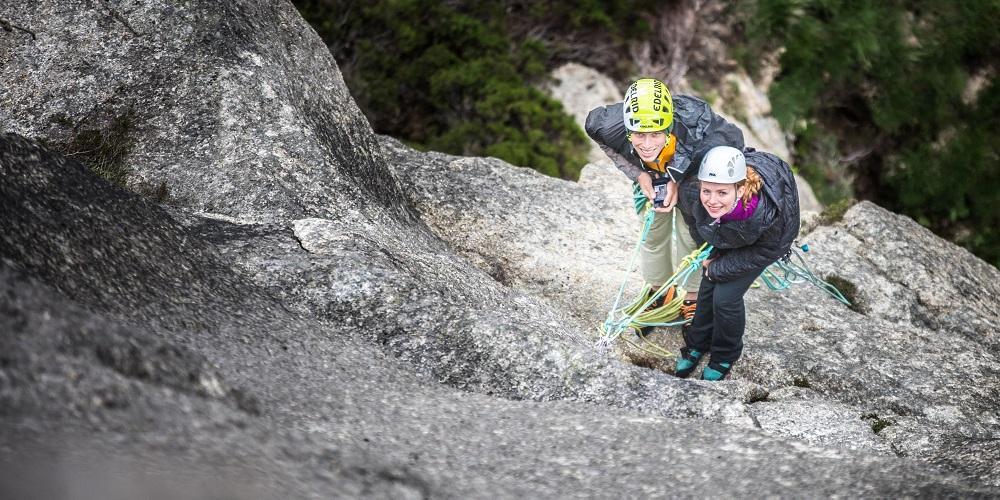 There's something magical about being in the mountains. You feel powerful and yet insignificant under their immense size. You can't help but be blown away by what a mountain truly is; millions of years of formation grown from the earths slowly shifting tectonic plates; what is in essence a time that spans far longer than the age of any human culture that ever existed. The mountains we know today will have hardly changed between now and our earliest ancestors and yet look at how we've changed? Mountains are beautiful because they are these silent godlike structures. We like to think we have dominion over them, but the mountains will still be there when we are long gone... I love climbing in the mountains because of this; a feeling of timelessness, an aura of eternity, and when I climb amongst them I feel a part of them; I am no conqueror, I am just a blip in time and space the mountains have let pass.

Marie and I looked far off into the distance; we could see the wall! Water trickling down the dark granite faces high up on the side of Chir Mor. This was on day 1; Day 2 however; all we could see was a grey cloud looming over where there was once a magnificent mountain crag!

Our team had split up for the day - an unfortunate spell of bad weather the night before had dampened the hearts of our comrades and they'd opted for a much more accessible crag. In a slightly frustrating state of affairs I had left all my gear at the crag. I'd have to go back regardless or be it a very expensive mistake!

I was going back up whether it was blue skies or multiple tornados in a hurricane! 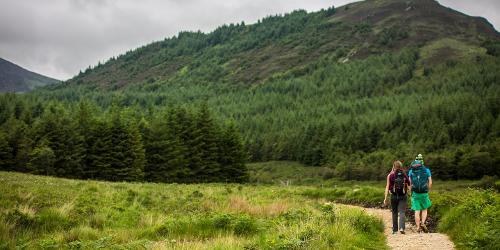 Marie and I zipped ourselves up in matching head-to-toe waterproofs and began the boggy approach to the base. An hour and a half later and we're standing looking up at where once was a crag. Now a swirling vortex of cloud partially covers the mountain, only allowing short glimpses of dark rock amongst the lush green vegetation surrounding.

The grassy slopes of Chir Mor had proved an ample challenge when it was dry; now they were wet and I was finding the ground a lot harder to navigate! With sections of scrambling on wet slabby rock faces coupled with what I can only describe as "Mossy Turf Climbing"; I'd say this approach was certainly the most exciting in my 3 weeks climbing on the isles! Marie had not done much of this sort of scrambling before and I was struggling to control myself not to just pick her up and carry her all the way like Yoda on my back - but she was brave, braver than me and stuck to it!

Some of the dicey sections of the scramble had drops of up to a 100ft into a cloudy abyss. The false comfort of not seeing the ground provided some form of confidence when climbing, but I knew it wasn't based on logic, just a fleeting hope that the ground was lying just below the cloud line (of which I knew it certainly wasn't!).

We eventually made it to the base of the crag; it took the form of a shadow in the mist. My imagination running wild thought it looked like the mountain trolls turned to stone from "The Hobbit". I sat there with Marie for a moment; we looked up at the dank walls; down towards the valley floor with nothing but white mist visible. I sat for a while enjoying the thought that we are the only people here, the only people that will probably be here for quite some time, and actually how many people will come here this year? A handful...?

Solitude can be a beautiful thing. 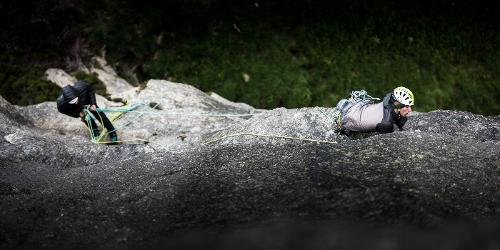 I felt an urge to take the gear and run. We'd made the death scramble, all we had to do was make the slippery down-climb and we'd be home free! Tea and cake awaited us in the cafés of Arran!

But I knew we had it in us to make a climb and that was enough to turn my head towards "Armadillo", a fantastic looking wall flowing up what looked like a challenging corner with a tricky finale through a roof I had no doubt was where the difficulty lay!

I geared up for the climb lacing my harness with an assortment of cams, nuts and slings before finally slipping on my cold climbing shoes and tip-toeing about the base from rock to rock trying to avoid getting my feet wet on the grass.

The billowing cloud was breaking apart and I had hoped that perhaps this was a sign for the sun to burst through, drying the rock and making the upcoming climbing a fair bit steadier... I should be so lucky. The cloud only amassed from above and remained a continual presence around me. As I climbed higher, I would look down to see Marie becoming ever more distant until eventually she was just a part of the shifting cloud.

The climbing had been steady through the corner as I had suspected, but the roof looked tricky. I managed to rest underneath, but coming out through the roof would be a challenge. The wall where my feet had to go was wet, the handholds damp, and the conditions were not in my favour! I had created a nest of gear, it would certainly hold a fall but I was still nervous as any climber is when climbing on wet rock; you just don't know what's going to slip first, your hands or your feet?

I timidly left the comfort of my safe house... 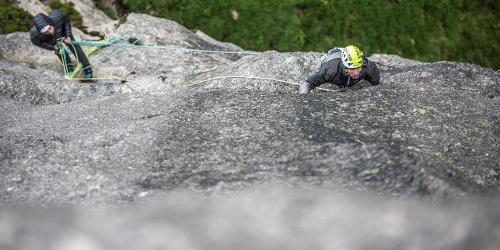 As I moved around the roof I could feel my fingertips rolling on the rough granite; it hurt me to know that if this had just been dry then I'd be moving comfortably, I kept going anyway... I made a high step onto a rounded break and pulled on to a huge block with both hands! The rounded break was slightly unnerving when wet, but two more steps and I stood safely on the grassy ledge, overwhelmed with the quality of the climbing despite the damp conditions.

Marie followed me up the climb removing the gear I had placed as she went. The climbing was tough for her, she wasn't used to this granite style let alone wet granite - but she's stubborn and refuses to give up! I'm enjoying watching her climb from my little grassy perch, she dances in and out of each section I'd lead previously and I remember vividly my own thoughts and movements retrospectively.

Soon we are both standing on the little grassy ledge together. I take a moment to wonder where we are; another even more impossible place to be right now!

Satisfied, we abseil off at the top of this pitch! I'm glad we came up here, I'm ecstatic we climbed this. We braved the conditions and made the most of a day that might have been a write-off for less adventurous souls. It's now time for some tea and cake!

As we walk down the valley I look back up at the wall; I see the line we took; I see the grassy ledge. Our success is of no consequence or meaning to anyone but ourselves; which for me is the beauty of climbing on mountains. It's not about conquering them, just being one with them for a tiny moment in time, and that is enough...