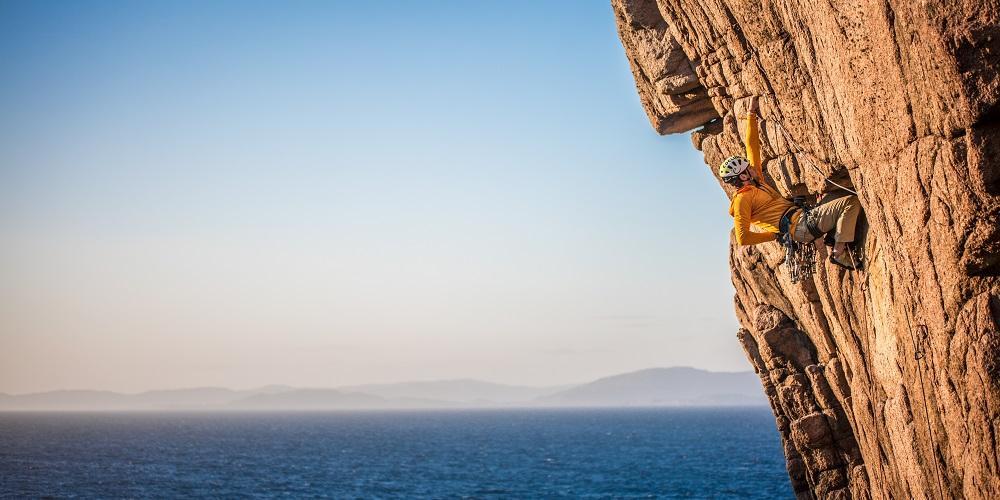 My grandfather was a chief engineer on oil tankers; he saw every corner of the globe, bringing home with him an endless ream of stories that I grew up listening to. Enchanted by visions of far-flung lands, exotic cultures and a life less ordinary, the desire to stick around my homeland of Scotland really didn't hold much appeal.

The Western Islands of Scotland have shown me a beauty that I haven't seen replicated anywhere else. Each island has something special, something unique. It's hard to describe because it's not just the look of the islands that draws you in, it's the feel of them too!

Our island hopping adventure this year allowed us to get a taste of some of the best the islands have to offer!

The Island of Iona

We couldn't have asked for a better day on Iona - the sun was hot, the sky was blue and barely a cloud in the sky! Great conditions for sunbathing, but sometimes it can be hard to climb under the full intensity of the sun...

I never thought I'd be saying that about Scotland!

Iona is a tiny little island; barely enough room for a tiny village and... a golf course!?!?! That's right! A golf course of all things!

The climbing we did was situated on the opposite end of the island. The crag was sea facing with a huge platform in the centre of which stood a magnificent pillar of solid rock!

Of all the notable features, this was the obvious one! Sam and I ran around the pillar, looking up at it and trying to get an idea of what the best tactics for climbing this would be. The best route on the pillar was up the clean jutting arête, which was for lack of a better phrase, "The King Line"of the crag!

Marie and Marianne spent part of the day just basking in the sun; it was just too glorious to disallow themselves the pleasure.

I looked up for a moment and thought I was seeing things... Rebekah was three quarters of the way up a rock... And no rope! She was soloing! Without a rope and easily 10metres up already she wouldn't want to slip here, but she was in complete control. Soloing is not something many climbers challenge themselves with, but if you are an experienced and confident climber it can be both an exciting and meditative experience. Rebekah continued on her rope-less vertical adventure until she topped out of the crag - Success!

Rebekah Drummond
""The Passage" was a great climb! All the holds were outrageously good, the kind of amazing holds that you only get on trad routes, plus it was pretty exposed and in a nice position making it a great solo."

I returned to the pillar and began gearing up for my attempt - I will admit I was a little nervous. Climbing is all about assessing situations; some call it a gamble, but I prefer to think of it as a risk assessment. We weigh up all the factors until we come to either the "Go For It" or the "Nah Let's Leave It" decision.

I knew there was nothing to fear with this climb; the gear was good and the climbing was well within my ability, I could do this!

The rock was fractured all over and looked as though it wouldn't handle my whole body weight, and yet when I climbed I realised how solid it actually was. The rock was really grippy and I felt my white chalked hands sticking to the rock like Velcro.

As I climbed higher I got to the point where I knew down climbing was pretty much impossible; I had to keep on trucking upwards otherwise my arms would tire and I'd fall. I engaged in the tricky final section of the climb; about 15m up now and I was in a really good headspace. I engaged with the climbing, firing off move after move as I got higher towards my end goal. I grasped the last small edge of the climb and pulled hard on one arm to reach the glorious bucket sized hold where I knew there was no letting go from!

I stood on top of the pillar feeling a wave of relief and satisfaction... it was Sam's turn to climb the pillar, then we can go for tea and cake! 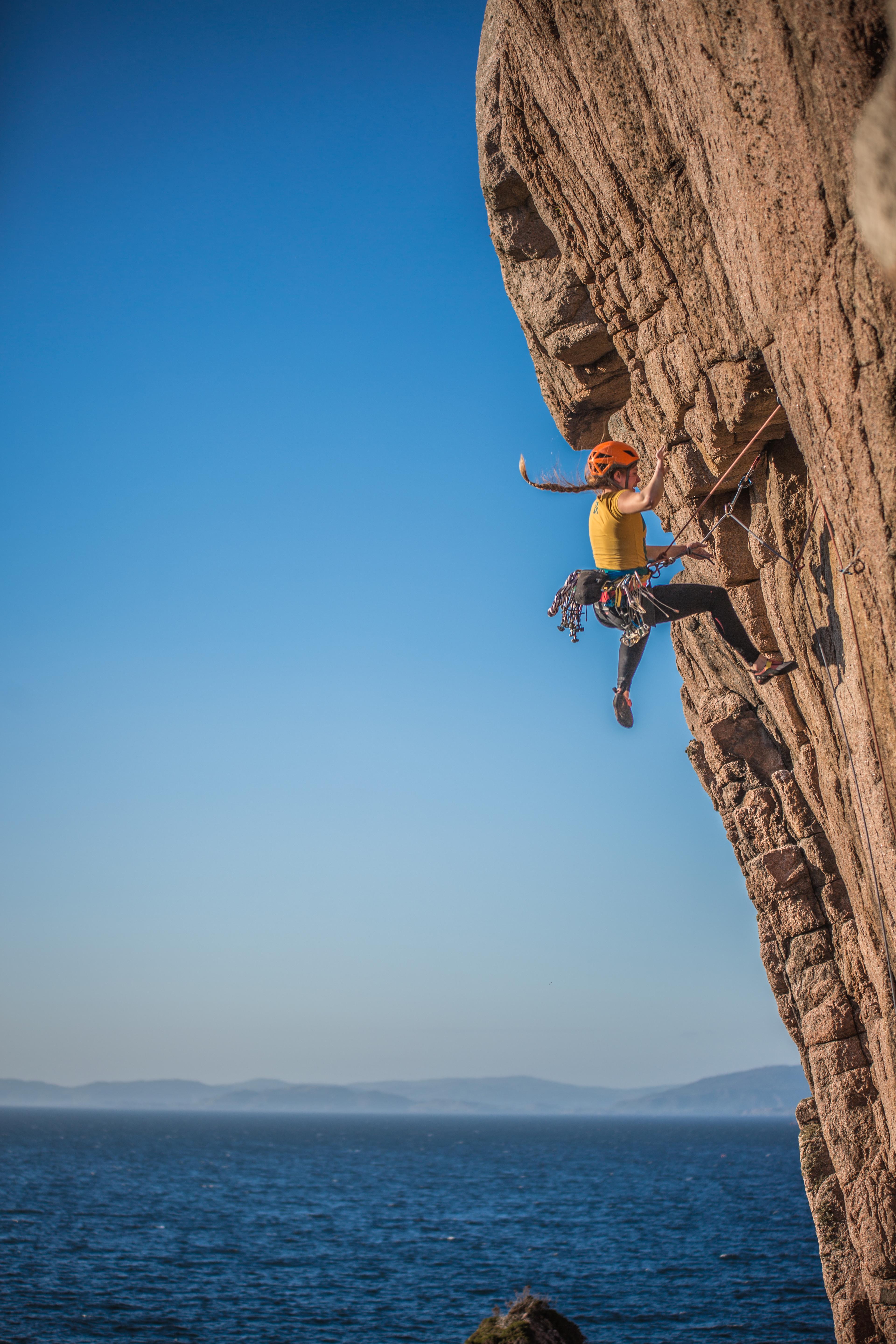 The Pink Granite of Kintra is magical! I've never seen rock change colours as vibrantly as this. From a dark red in the shade of the morning to pink in the afternoon sun and then as the sun sets casting it's final golden rays across the sea the rock turns to a flaming orange!

We parked the cars up at a wonderful little bay where a few quaint houses and a dried up boat lay. The walk-in was a pleasant stroll through spongy ground covered in these pretty cotton-like flowers, that in the evening lit up by the moon looked like thousands of tiny floating fairies!

The crag itself was stunning; although it wasn't that high it made up for it in the quality of the climbing. With routes of all difficulties it was actually the perfect crag for a mixed ability group like our own.

I started off the day climbing what I thought was a much easier line for Marie to follow - turned out I read the guide wrong and it was much harder than expected! But Marie rose to the challenge and climbed up the steep granite flake to meet me on the grassy top out.

I was most impressed by Rebekah's attempts on what was certainly the best climb at Kintra - a steep imposing wall with a gnarly upper section that continually spat her off. She gave it her all and took some big falls. Calum followed suit and unfortunately fell off at the same place. I was eager to give it a go and managed to use height to my advantage and gained a much better hold that they had found difficult to reach.

Calum McBain
"Casa de mi Padre was brilliant, it climbed like a steep indoor route on huge holds with gear that was better than bolts! With a hard bouldery crux that will suit anyone used to pulling hard indoors - unfortunately it got the better of me!"

The best days climbing are certainly those where we arrive in the morning and leave as the sun is setting. The summer sun meant we had an extra long day but we certainly made the most of it on this one! 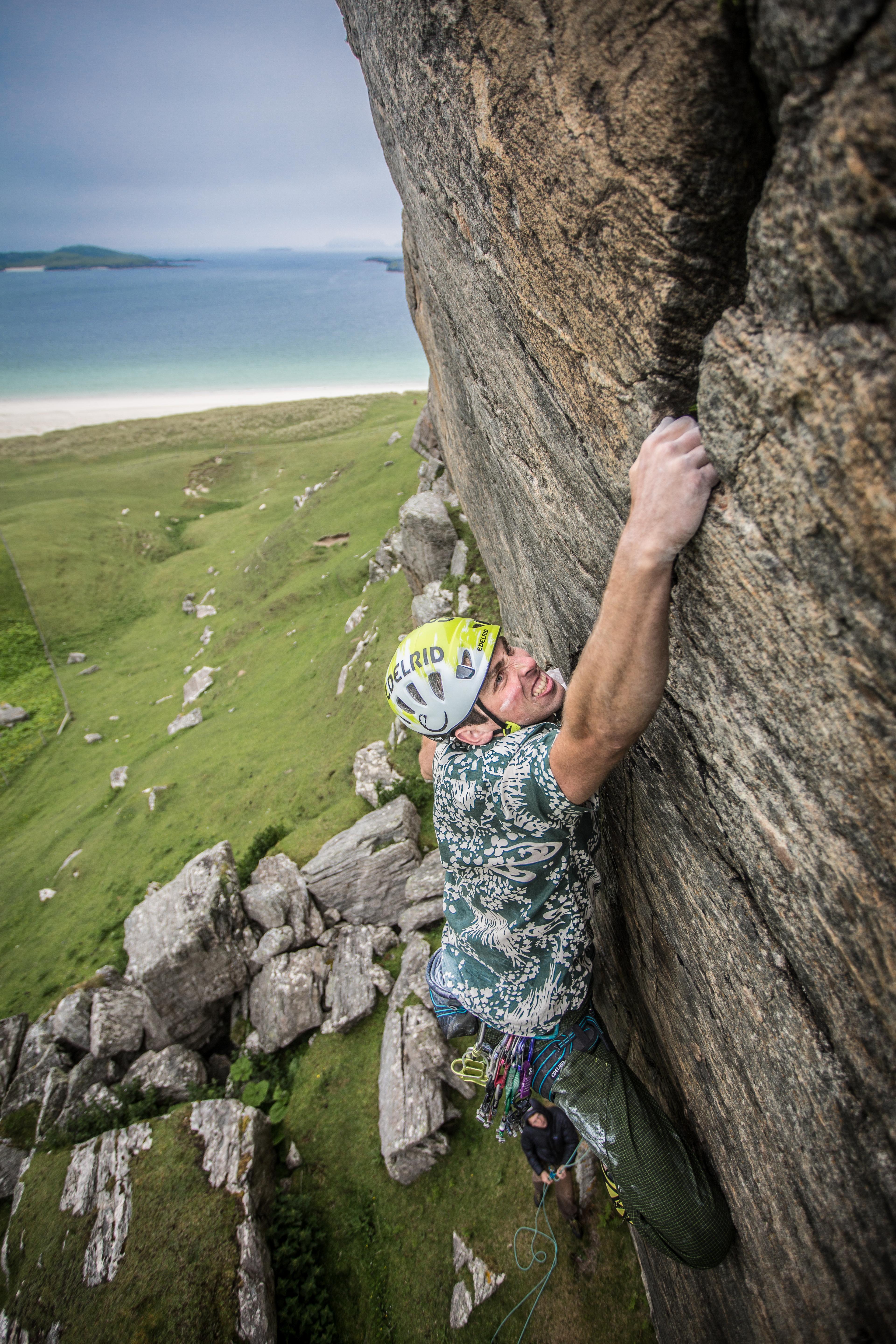 We arrived at this incredible bay; a beach of golden sand arching concave against crystal clear water with waves I can only imagine would make a surfers dream.

I jumped out the van and ran straight onto the beach; I could have been in Barbados! In the distance I could see an incredible sea cliff where two distant figures were walking along the base. Calum and Rebekah had left earlier to catch as much of the day as possible, but just as I had seen them I felt a rain drop.

The rain came down hard in seconds! I ran back to the van and jumped inside joined swiftly by Sam and Marianne!

Well... it was time to put the kettle on!

I did wonder for a second how Rebekah and Calum were doing at the crag getting pelted by rainwater, but that thought drifted away as soon as the tea was brewed.

As quickly as the rain had started, it stopped again and within minutes I could already see the wind blow-drying the rock, changing the colour from dampened dark to a light dry grey again.

When we arrived at the crag the rock was already dry and the decision to risk getting wet again by yet another freak rain shower was paid off in full with probably the best day cragging yet!

Dalbeg was beautifully carved Schist taking the form of a wave that seemed to oppose that of the powerful sea waves below. As though it was designed for climbers, a huge platform lay at the base of the crag giving us the perfect station to belay, picnic and of course, sunbathe!

I think we more or less ticked the crag as a team! The best route of the day had to be the magnificent steep crack that cut diagonally across the rocky wave. It was certainly the king line of the crag and the most obvious feature to climb. Everyone of the team climbed it, but certainly the best performance of the day came from our very own filmmaker, Euan, who stepped out from behind the camera and tied into a rope for the first time of the trip!

Dalbeg was my first experience of Lewisian rock climbing - it certainly set a high standard and a hard one to beat! 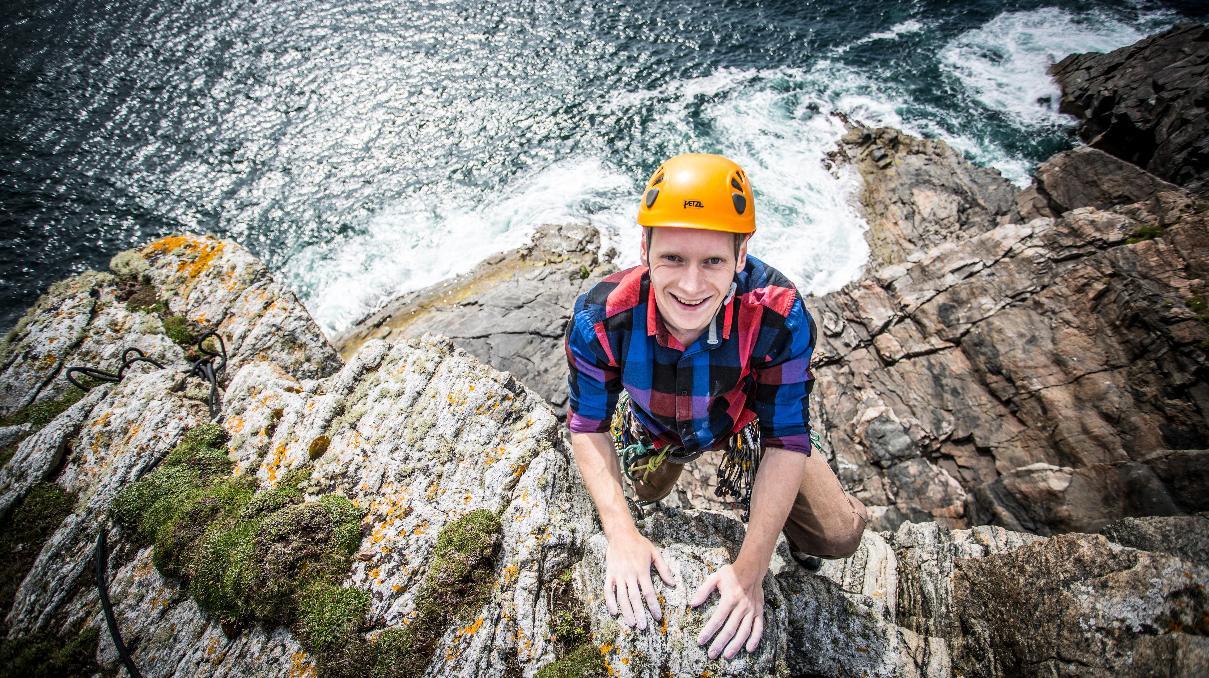 The Islands are for the adventurer in you!

One of the things I love about climbing is that there are no rules, no barriers, no limits! Climbing is something absolutely anyone can enjoy because you can do it at any level; there are no set routes; you decide what you want to do and you do it! It's about being creative, looking at what you've been given by nature and creating your own adventure!

The islands are the best place to do this. The climbing is fantastic, the scenery is gorgeous and the situations are always adventurous!

Don't settle for less! Adventure is out there waiting, you only need to be brave enough to reach out and grasp it!