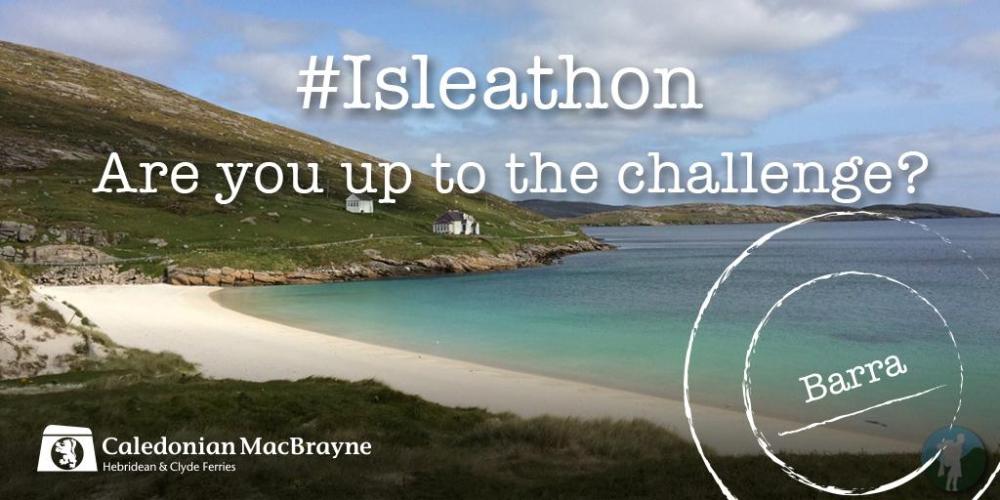 There is a twinkle in the eye of anyone who has been tapped by the wand of the Outer Hebrides. I've spent much of the last month discussing our #Isleathon campaign with fellow Scotland lovers and have watched in amusement as eyes light up and nostalgic memory gathering sets in. I've seen heads shake in reflected incredulity, heard sentences tail off, even eyes tearing up....it is that kind of place. For my part, I'm a lifelong Hebridean fan but this is a first visit to the Isle of Barra. Tissues at the ready.

Immediately upon arrival it's clear that Barra has been built to awe. As the ferry comes in to dock at the main settlement of Castlebay, the passengers instinctively charge for the stairways to the deck, fighting for the best vantage point to take in one of Scotland's most photogenic landings. A gorgeous spattering of islands big and small, the dominating peak of Heaval and, best of all, the bold island fortress of Kisimul Castle leave me furiously trying to decide where to even aim my camera. 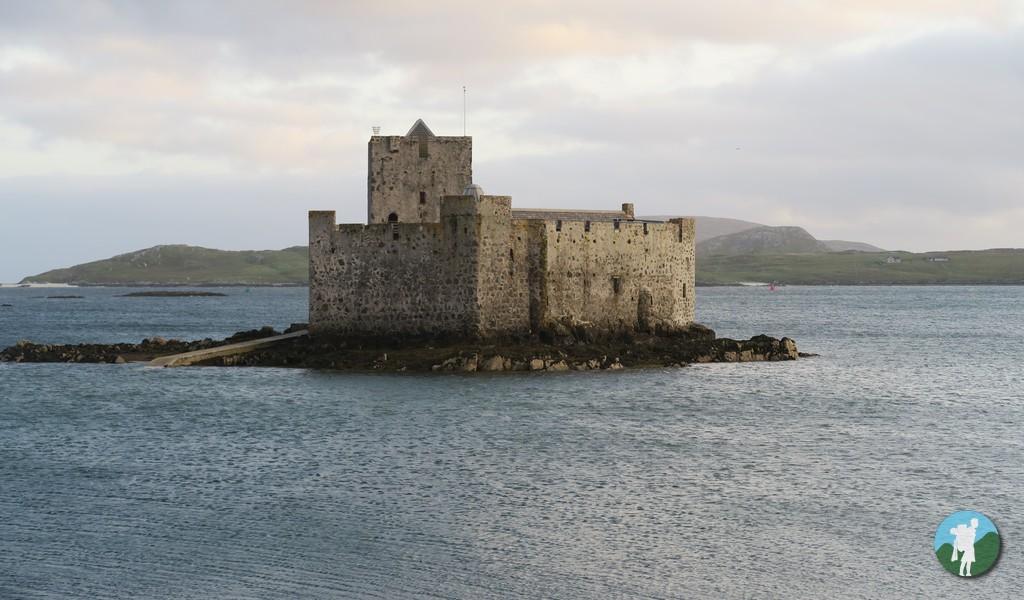 The hordes disembark and I spend well over an hour stalking the castle from the Castlebay shoreline. A stunning setting, the location of Kisimul is without question amongst the most impressive of Scotland's endlessly spectacular castles. Originally going as far back as the 11th Century, the fortress has long been the stronghold of Clan MacNeil. Accessible only by boat, it is now cared for by Historic Scotland who lease it for the annual sum of £1 and a bottle of Talisker. That made me smile. As I lose the last of the light, my imagination takes me a wander as I visualise blockades and doomed sieges - this place looks truly impregnable.

Limited as I am with time, my exploration of Barra begins shortly after dawn the following morning. In my seemingly endless lunacy, my mind takes me storming up Heaval long before the rest of me has had time to figure out what's going on. An unmarked and steep route, although not at all precarious, I have the south of the island to myself as I reach the target of Our Lady of the Sea. Looming protectively over Castlebay the Madonna and Child statue evokes obvious, not-to-scale, comparisons with Rio's Cristo Redentor. The statue does not in fact represent the summit, however, and for that a further 20 minute hike is required. My screaming knees were not impressed but it is worth it and is an unmatched opportunity to assess the entirety of the landscape below. Looking north to the famous sandy landing strip at Traigh Mhor and south to the diminutive neighbouring islands of Vatersay, Mingulay, Sandray and Pabbay my appetite to explore has been suitably honed. 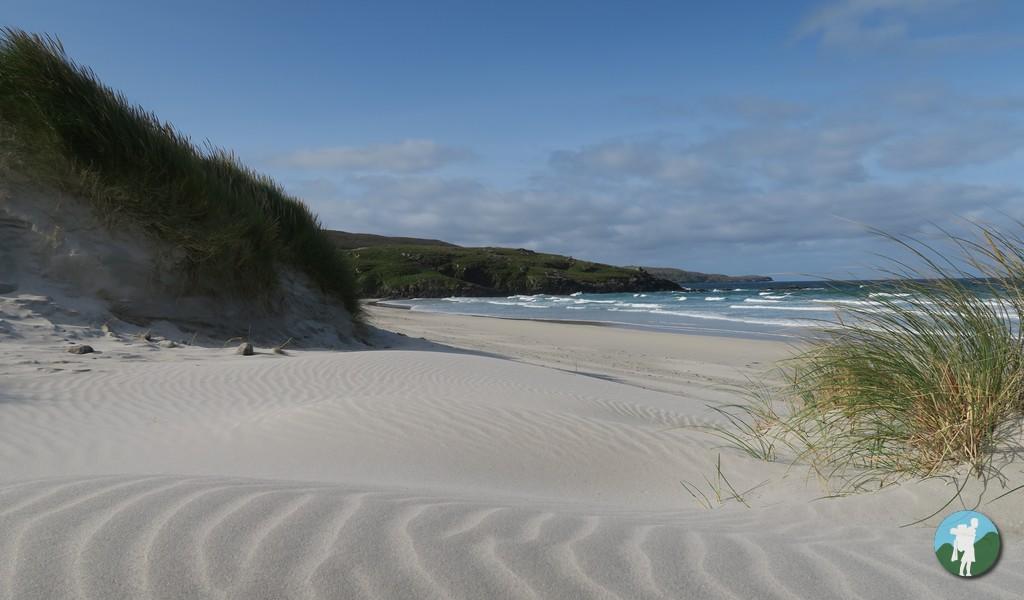 Tearing back down Heaval - yes kilt and all - I must get to the airport to witness a beach landing for myself. Traigh Mhor is the only airport in the world of its type that takes scheduled flights and the image of the little Flybe plane touching down on the sand here is amongst the most iconic of the Western Isles. Taking heed of some local advice though, my journey to the northern end of Barra focussed primarily on the west facing neighbour of Traigh Eais. Instantly entering as one of the most beautiful beaches I've ever seen, this is an absolutely glorious stretch of sand. Exposed to the full force of the Atlantic there is that much-sought-after element of dramatic Scotland matched with subtle beauty.

While the rocky and rugged east coast of the island has its charms, I can't look past the glorious stretch of beach-laden coastline to the west when readying for my journey back towards Castlebay and the start of the loop. Turquoise waters and soft golden/white sands abound at Allasdale and Traigh Tuath, indeed you will be in and out the car repeatedly along this stretch as you spot another gem out of the right window. As is the norm in these parts, having to share a beach with so much as one other person is a highly unlikely outcome.

Having now done a near-complete loop of Barra (taking less than an hour's driving time), the road takes you either all the way back to base at Castlebay for a cup of tea, or to continue the jolly onto Vatersay. It's an Isleathon so no prizes for guessing where I'm spending the rest of the day.

Vatersay is connected to Barra by causeway and could easily make for a full day of entertainment in itself. With several more top class beaches and walking routes this is without question a spot I'll be returning to. But with time limited, I concentrate on Vatersay Bay and two beaches that I'll not forget in a hurry. While west facing Traigh Siar is another one to add to the growing list of superb Hebridean coastal wonders, Vatersay Bay itself may take top spot in this traveller's pecking order. Up until now, the west coast of Harris has been head and shoulders above the rest for me but this place is just about my idea of perfection. East facing and sheltered it has a hypnotic beauty that sets it apart from the west facing beaches of the day so far. The clearest water I've ever seen lapping gently at the almost white sand seems unreal. Apparently when I was wee I liked to spend much of my summer holidays cavorting in the nip in the waters of the Western Isles. Clearly I was wise beyond my years. Even now, this is somewhere that's very difficult to walk away from.

With beach memories to last me right through the colder months on the way, it's back to Castlebay and a final evening to savour this idyllic spot before my early morning ferry taking me back to the city lights. Barra, it's fair to say I will be seeing you again soon.

#Isleathon has been the latest campaign of the Scotlanders travel blog collaboration. Working in partnership with our friends at Caledonian Macbrayne we teamed up to promote some of the great islands of Scotland. Taking on an island (or islands) each we spent a weekend unearthing the highlights and broadcasting them to a worldwide audience on social media. Reaching well over one million people it's hopefully not too soon to say that Isleathon II could be on the cards for 2016.