What do we search for when we go climbing? 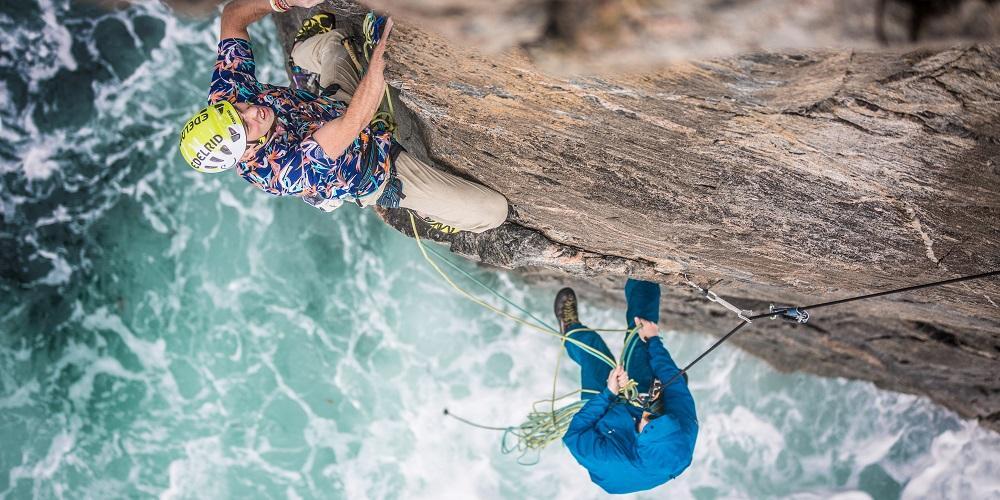 When we go climbing, what is it that we search for?

I think we all look for something a little different... For me, I am on the hunt for challenge, inspiration and adventure! Sometimes I get one more than others; other times I get a taste of all three! Part of my desire to climb in Lewis was that I knew the climbing here was bold, hard and inspiring; I knew I would find what I was looking for here!

Climbers often search for what many call the "King Line" - this is the perfect route! It will take the best line up the rock face; it has the best climbing on the most exposed section of wall!

I had heard of one such line existing on Lewis that would stand out above all others; it was called "Mega Tsunami" - a fitting name for the wall that rarely see's waves of less than 10ft high breaking against it's base on a windy day!

My first real-life glimpse of the climb felt like a dream; it was perfect in every sense of the word. A clean arête bursting out of the raging sea sea like the fin of a giant shark! I could see the line clearly; starting from a ledge low down you climb the arête in its entirety all the way to the very top... perfect!

Just like my 8 year old self whose been given the keys to his favourite toyshop, I danced around the cliff ecstatic about what I knew would be the greatest climb of the trip! 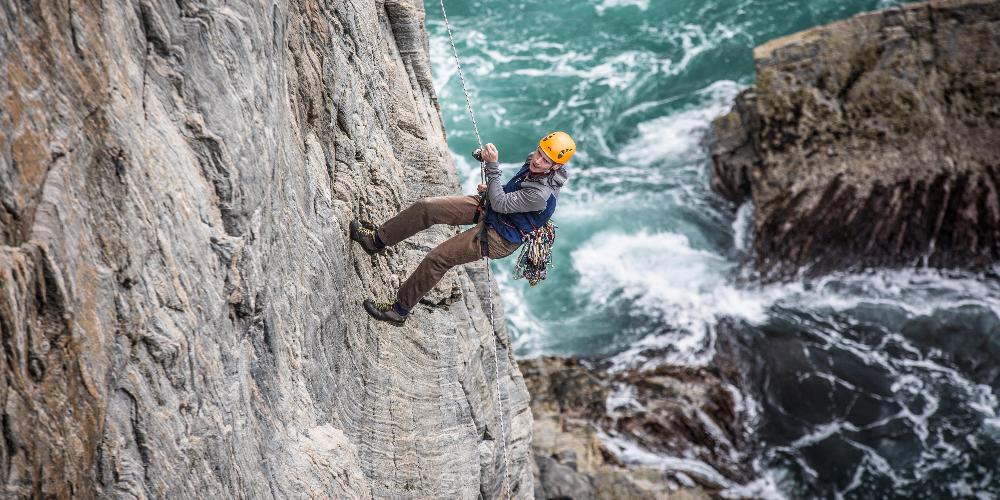 The wind was howling; the rain was spitting and the waves were crashing! I looked over the top of the arête and down to the sea below... I wasn't going to be approaching the crag from below like the guide suggested; the sea was too high and the waves too rough - I'd last seconds down there! I'd need to abseil down from the top until I felt it was as close to the surface without getting beaten alive by the raging sea.

I abseiled down the line, scoping out the holds, drying them as best I could until eventually I was as close to the sea as I dared go! I hung around some time looking at the swirl of white frothy seawater, watching the waves crash against the rock and wonder how much more it would take for a wave to reach me...?

I climbed further up the wall and had a play on the moves. The climbing was amazing; the moves felt great to execute, the sequence phenomenal and the position I was in; terrifying but exhilarating!

My good friend, Sam Williams, joined me soon after in abseiling the route and together we giggled like a pair of schoolgirls who had a crush on the coolest kid in class. Except we're in our mid 20's and the coolest kid is a big piece of rock sticking out the sea!

Just as we had decided to make a go of it, somebody up above decided they didn't want to give us our moment of glory and the heavens sprayed an almighty torrent of water down upon us! Sam (for good reason) left whilst I sat in the rain a little longer wondering if it would stop... 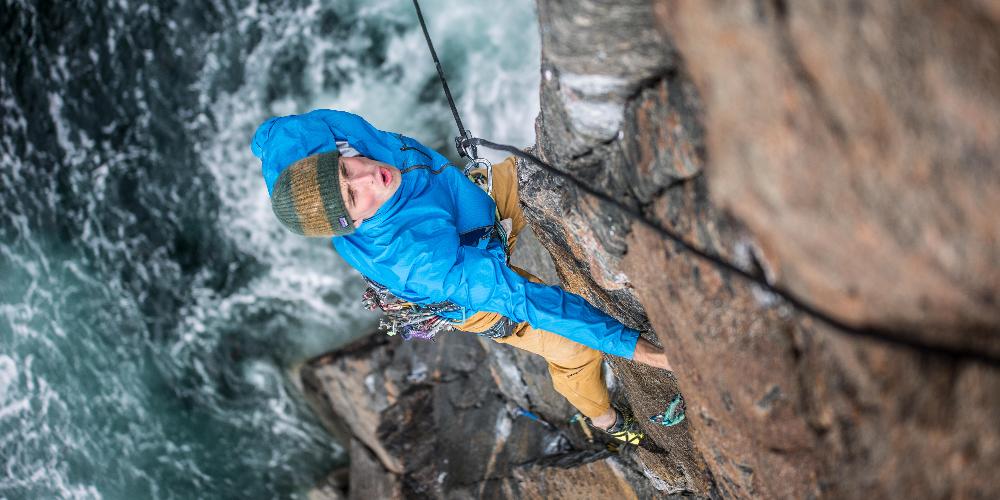 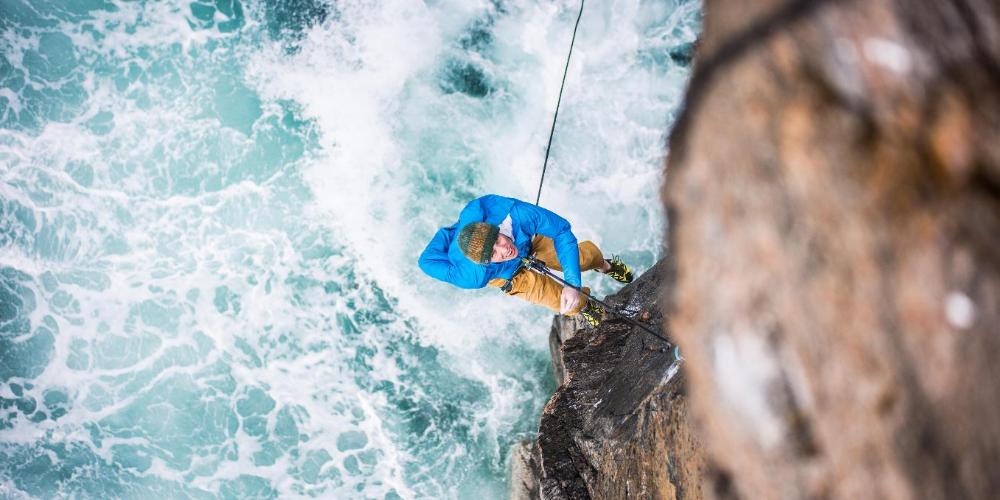 I eventually packed up my gear, took down the ropes and walked up the hill only for the sun to burst through the clouds and the rain to stop! I stood there a few minutes; looking back at the arête I knew it wouldn't take long to dry, the swell of desire to get back on it welled up inside me... I ran back down and set off for one last inspection to see if the holds had dried.

I got back down to the bottom, the waves seemed to have swelled even higher now and the wall was certainly damper, but I knew it could go... Then suddenly out of nowhere I was hit by something! My whole body was under water and I felt a rush as I was sucked down with pressure; the rope held me in place attached like a limpet to the wall!

The biggest wave yet had come out of nowhere and soaked me - amazing though that despite being underwater for seconds, the waterproof kept me bone dry on my upper half! I took that as a sign, enough adventure for one day!

Back at the van I figured: "I'm wet already, so might as well go for a swim?"

And so we went for a wee dip in the sea at a really nice beach nearby - a lot less windy and wavy in the bay!

The next morning I woke to sun and wind; a good sign!

Back at the crag the wall was dry; with intermittent spells of rain, the conditions weren't perfect, but what's an adventure when everything is how you wanted it to be? Sam and I wasted no time at all and got to work!

I went for the lead first... 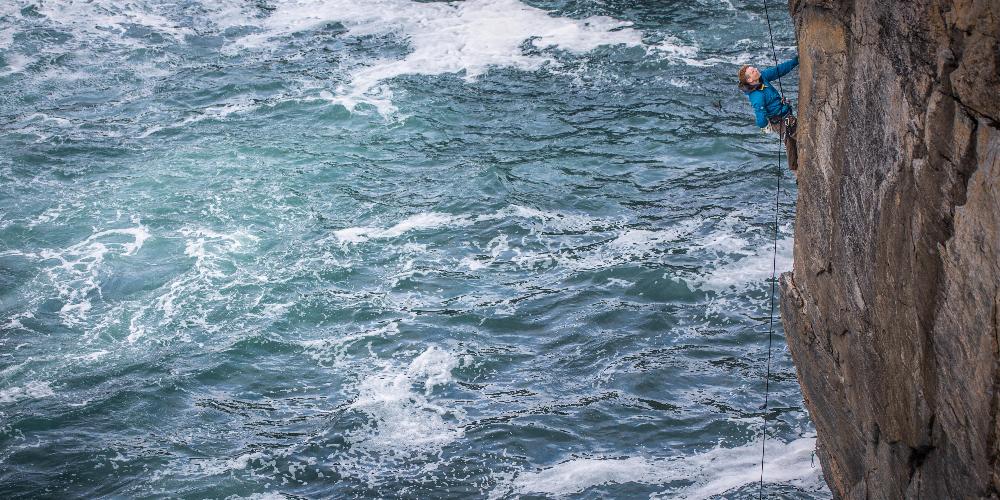 The initial climbing was wet from sea spray. I had to be careful with every foot placement; nothing could be rushed. As I got higher, the rock dried. The rain spat down from above, but the wind was so strong it dried instantly on contact with the rock making no difference to the friction.

I entered the trickiest part of the climb and for a moment I faltered; I had forgotten how to place some crucial gear... I took a moment and figured it out; I was safe!

After a brief recovery, I continued to climb up the imposing arête! I came to the most difficult move; a long span left to a shallow edge... The hard part about this move was getting the balance right. On the sharp knife blade feature of the arête you can shift off balance easily; the footholds are small and the handholds rounded; it's hard to get a good grip of them at times without a perfect body position!

I made the move; my arm outstretched reaching high for the hold; my fingers curled around the lip of the edge and held on... One more move later and I was hanging off the glory hand hold, I won't fall off now!

Despite being in a place of relative safety, I look down at the imposing crash of the sea, the long run-out between my last bit of gear and just the madness of the position I was in... this is what I came here for! This is what I climb for! This is adventure!

Sam followed suit an hour later with an incredible performance and the second ascent that day - in history this climb has probably only had a couple of ascents and in one day it's seen two in as many hours!

"Mega Tsunami" has everything that constitutes perfection in a rock climb; my only sadness came from knowing it will be a long time before I find another climb as good as this - guess I'll just have to book another trip back to Lewis!