Tobermory High School Pipe band is drumming up more new members than ever before thanks to CalMac's Community Fund.

They now have more than 30 young people engaged in learning and playing the drums. Thanks to the Fund the band were able to buy new drum harnesses and now have almost twice as many drummers as pipers.

Pipe Major Calum MacLean said: 'The purchase of the new harnesses has made a massive difference to the band members for carrying the drums and feeling more confident whilst playing in front of people.

'The old harnesses were in limited supply, were uncomfortable and not easy to adjust, making them difficult to wear for long periods, especially for the members who are quite small or tall. 'We now have 15 drummers ready at competition level using the harnesses with another 15 coming through as learners on tenor, snare and bass drums.' 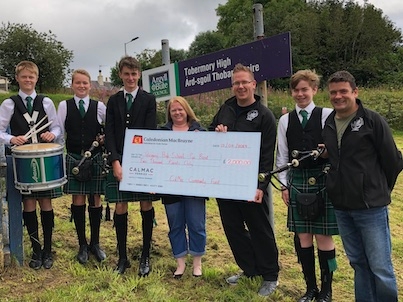 Drumming is now being offered in both the primary and secondary of Tobermory High School with both parents and teachers commenting on the changes in confidence being part of the band brings.

Last year CalMac's Community Fund was designed to create new opportunities for young people by supporting non-profit youth organisations based in a mainland port or island the company serves.

Organisations applied for an award between £500 to £2000. So far the Fund has supported 76 projects from woman's football in the Outer Hebrides, to the Campbeltown Sea Cadets and a Gaelic youth club on Skye. Each application was judged by a screening panel of young people recruited from across the company's network, in partnership with Young Scot.

'A key part of the Community Fund's aims is to open up opportunities for island young people that they would otherwise not have access to. With the increase in numbers participating in the band there was clearly a demand that wasn't being met. We were delighted to be able to kit them out to enable more island young people to take part,' said CalMac's Corporate Social Responsibility manager, Gordon McKillop.