Gaelic Medium Primary school pupils in Portree will soon have somewhere to practise their language skills in the evening.

Thanks to ferry operator CalMac's Community Fund Comann nam Pàrant Port Rìgh (CnPP) have been awarded £2000 to help with the set up costs of a new Gaelic youth club in the town.

Aimed at Primary 5-7 pupils the club will be a welcome safe space during the evening hours. The club will initially be for pupils of Bun-sgoil Ghàidhlig Phort Rìgh but will be opened up to other Gaelic Medium schools in the north of Skye after an initial six month pilot.

'Comann nam Pàrant Port Rìgh was at the forefront of a long campaign to establish a Gaelic school in Portree and the group continues to support efforts to ensure Gaelic medium provision is improved at all levels. A key way to augment the work in the Gaelic school is to ensure children have an opportunity to use the language for longer periods, out of school in social settings.  We see the establishment of a Gaelic club as one way to do that, engaging young people in activities through which they will widen their vocabulary and language use. CnPP is very grateful to CalMac for supporting our proposal and we look forward now to getting the club off the ground.'

CalMac's Community Fund is open to non-profit organisations involved in activities that will benefit young people aged 26 and under from island or coastal communities the company supports.

So far the Fund has supported 24 projects and invested £43,435 in west coast communities. 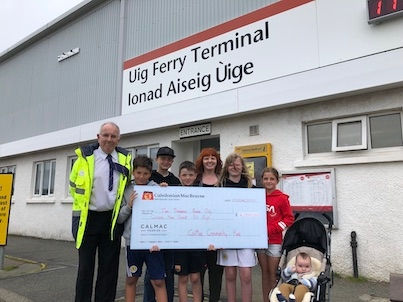 'The response since we made the first round awards earlier in the year has been fantastic.  We are already seeing the money put to good use in the Western Isles and I'm delighted that we are able to help set up such a valuable youth resource in Portree,' said CalMac's Director of Community and Stakeholder Engagement, Brian Fulton.

Each application was judged by a screening panel of young people recruited from across the company's network, in partnership with Young Scot.
Last year CalMac's 33-strong fleet carried more than 5.3 million passengers and 1.4 million vehicles to 50 ports and slipways on island and remote mainland locations.

Other grants made in the Skye, Raasay, Small Isles and Mallaig area included £974 to Dannsairean an Eilein Sgitheanaich (DAES) in support of their MacKinnon Festival Trip project, £1,710 to Skye Events for All (SEALL) to help fund their Tune-Up Trad project, Skye Muay Thai also received £2,000 and the Staffin Youth Club project was granted £2000