More than 50 pupils from Rothesay's Joint Campus boarded the MV Bute to help the crew hone their safety skills.

The P7 and S2 pupils took time out of the classroom to take part in a mock evacuation from the vessel at Wemyss Bay.

Captain Calum Bryce, Master of the MV Bute welcomed the group on board.

'The safety of the passengers has to be our number one priority and drills like this are a great way for the crew to keep our drills and safety procedures finely tuned,' he said.

'It is also a great way for young people who are likely to be regular travellers with us to be aware of what they need to do in the event of an emergency.' 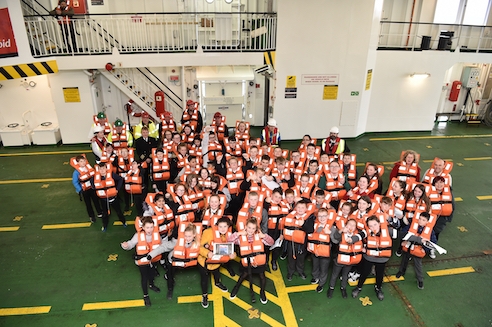 Picture shows: The pupils assemble at their muster station ready for evacuation.

This exercise is likely to be held regularly so every pupil in the school will eventually have taken part in a safety exercise aboard.

The 2600 tonne Bute was launched in 2005 specifically for the Wemyss Bay Rothesay route and can carry 450 passengers and 60 cars.

Last year the vessel and her sister ship MV Argyle carried more the 700,000 passengers to and from the Isle of Bute.