Seafarer hands over the tiller after 45-year career

After a 45-year career with ferry operator CalMac, Captain Morrison's very last scheduled sailing from Oban to Barra was cancelled due to bad weather, just as his first sailing as Master was back in 1980.

'I've finished as I started, that's what I'll be remembered for,' he joked.

'Nobody will bother remembering what happened in between.'

Captain Morrison started his career with the company as a second mate on the MV Iona in 1974, before taking command of his first vessel, MV Lochmor, serving the Small Isles' routes six years later.

He has been Master of the MV Isle of Lewis for the last 22 years, first on the Ullapool Stornoway route and latterly serving Castlebay.

'I've seen a lot of changes over the years but basically it still come down to the lowest common denominator, taking passengers and cargo safely from port A to port B. That's what we were doing back when I started and that's what we are still doing today,' said Captain Morrison.

Over the course of his career he has served on all of the major rotes served by the company up and down the west coast, but has fondest memories of sailing the Uig Triangle between Skye, Harris and North Uist.

'I had very many happy years on the MV Hebridean Isles, 10 years in fact, as Master of that run, that was probably my 'Golden Years' as they say.'

'It was a more relaxing run which I discovered when I moved on to the Stornoway route, that was more demanding, much more pressure from hauliers, it was far more intense than on the Triangle.'

Over the years Captain Morrison said one of the biggest changes he's noticed is the weather and the impact it has on services.

'The weather is more unpredictable nowadays than it was in my younger days. There was more of a set pattern to climate at that time. If you had depression coming in from the Atlantic it would pass through and then the wind veered and eased off but now it seems to have more of sting in the tail.

'I would say there are more vicious depressions coming in than there was in the past.' 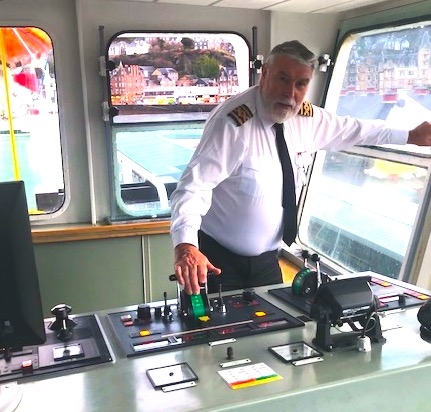 Pressure to deliver more and more services is one of the challenges that he'll be happy to leave behind.

'In a way we've become victims of our own success, the more successful we've become as an operator the more that's demanded of us. In the old days you had set services for the winter, now there is not much difference between summer and winter timetables. People are definitely travelling more but that brings it's own challenges for the fleet.

'We used to have periods of downtime for maintenance but that's hardly there now with the timetables we have to run, resulting in more breakdowns. Is it sustainable to continually work to such intensity, I find it very questionable that it is.'

Looking forward to his retirement Captain Morrison doesn't think he will struggle to occupy his time.

'I've got nine grandchildren, so I've got a full time job giving then ideas of mischief they haven't discovered yet,' he added.