Money raised by Caledonian MacBrayne staff for the RNLI has been presented to volunteers at Oban Lifeboat station. 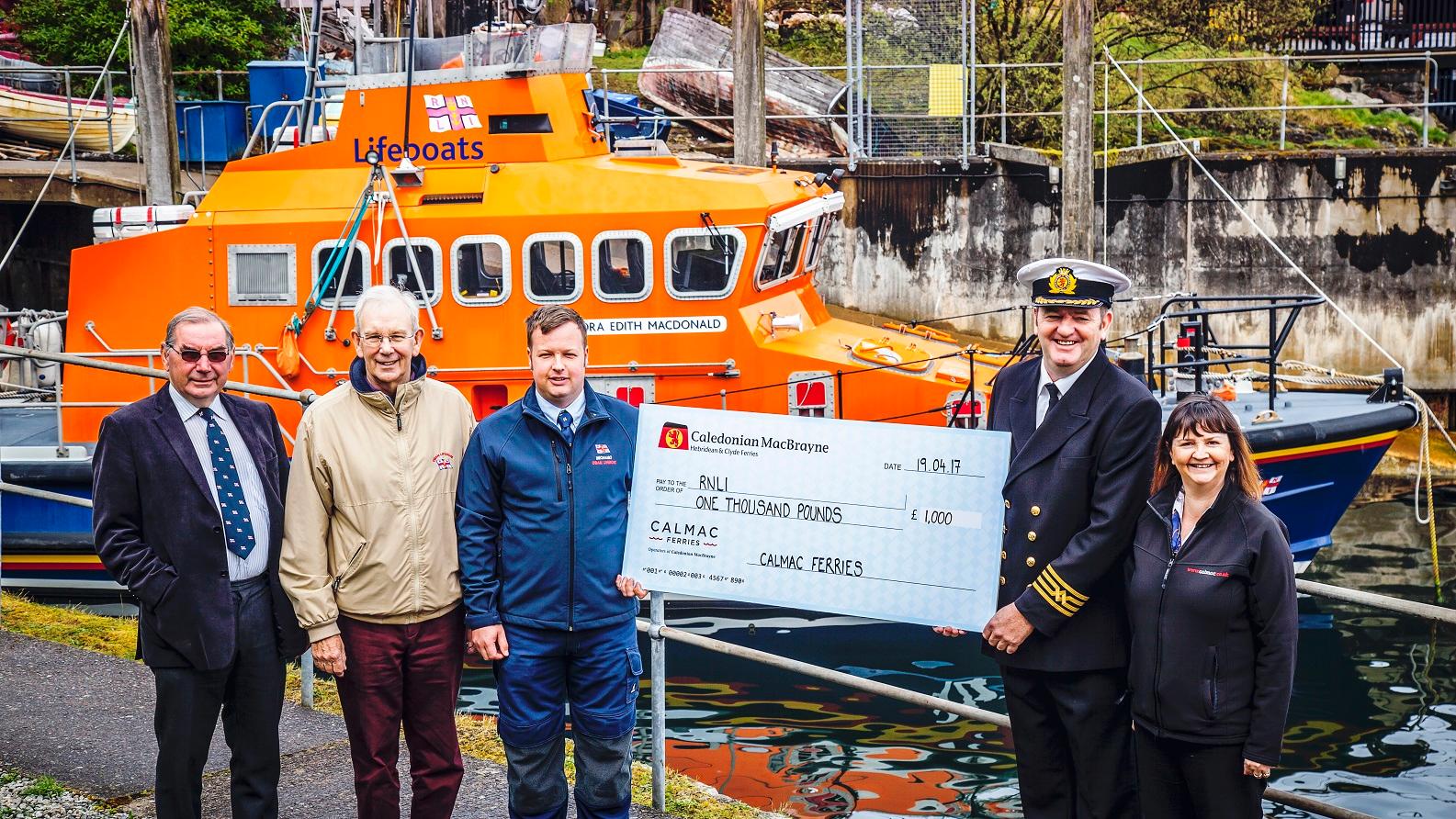 The £1,000 cheque was received on behalf of the institution by the branch chairman Mike Robertson, treasurer Les Stewart and lifeboat mechanic Tom Kennedy from CalMac's Captain Mark Scott, both master of MV Isle of Lewis and a volunteer coxswain for Oban Lifeboat, and port manager Allison McDermott.

Thousands of people require the services of the RNLI's lifeboats each year - in the UK and Ireland as a whole last year, there were 8851 call outs, with a total of 8643 people rescued; Scotland accounted for 1102 of those calls and 1126 of those rescued.

Oban's lifeboat was the fifth busiest in Scotland in 2016, answering 51 calls to those in distress and rescuing 46, devoting a total of 1,272 hours in terms of operations and training. The crew is made up of 22 volunteers, with further supporters taking shoreside roles, which can range from publicity to admin.

Overall, Broughty Ferry on the east coast was busiest with a total of 92 launches rescuing 29 people. The Queensferry team were next with 65 launches and 113 persons rescued, followed by Troon with 60 call outs and 36 people assisted, while Mallaig made 52 launches rescuing 60.

Scotland has a total of 46 lifeboat stations around its coast, with volunteers giving up a combined total of 40,561 hours of their own time last year to save the lives of others.

CalMac's donation to the charity represented a pound donated by the company for every staff member who volunteered to take part in a recent questionnaire in support of Investors in People - a total of 777, which was topped up by the company to £1,000.

"As a maritime company, CalMac is very supportive of the RNLI and well aware of the institution's activities around our shores," said Brian Fulton, CalMac's director of community and stakeholder engagement. "Obviously no-one ever wants to be on the receiving end of their help - nonetheless, thousands of people a year are very relieved to see one of the institution's famous boats come to their rescue.

"The RNLI is CalMac's chosen charity and we carry collecting cans on board all of our vessels. It is impossible to say 'thank you' enough times for the sacrifices made by the brave men and women who volunteer to go to sea, often in perilous conditions, to save those in trouble."

The chairman of Oban Lifeboat, Mike Robertson, who was also a long-standing crew member, said: "It was a pleasure to welcome Captain Mark and Allison to Oban Lifeboat station and to receive this very welcome cheque from CalMac on behalf of the RNLI.

"These fundraising efforts are much appreciated and go towards ensuring that our lifeboats and volunteer crews across the country are ready, at a moment's notice, to save lives at sea - sometimes in very challenging conditions."

Oban's current lifeboat is the 14-metre Trent Class Mora Edith MacDonald, which arrived in the town in 1997, replacing a Brede Class vessel which served from 1983-97.

In addition to the volunteer crew, the station also relies on volunteers for various shore-based roles, as well as an active fundraising group.

The £1,000 cheque was received on behalf of the RNLI by Oban branch chairman Mike Robertson, treasurer Les Stewart and lifeboat mechanic Tom Kennedy from CalMac's Captain Mark Scott, both master of MV Isle of Lewis and a volunteer coxswain for Oban Lifeboat, and port manager Allison McDermott. Oban's Trent Class lifeboat Mora Edith MacDonald can be seen in the background.