More than 25,000 people packed the esplanade at Greenock over the weekend to support the inaugural P1 Scottish Grand Prix of the Sea. 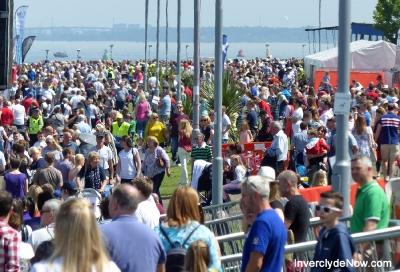 Sponsored by Gourock based ferry operator CalMac and co-hosted by Inverclyde Council and Riverside Inverclyde, a turn in the weather on Sunday couldn't dampen local enthusiasm for the event which, was brought to the Clyde by the world's biggest marine motorsport brand, Powerboat P1.

The crowds were entertained over the two days by P1 Superstock powerboats and P1 AquaX jet skis as they competed for points towards the UK Championships.

At the final chequered flag for the P1 Superstock races, the Pertemps team with brother and sister Sam and Daisy Coleman finished on top, ahead of Quantum Racing and home team Spirit of Inverclyde.

CalMac has been an integral part of the Inverclyde business community for more than 100 years.

"Despite the weather on day two, this event has been a great success and has really put Inverclyde on the map to global audience," said CalMac's Head of Commercial, Graeme MacFarlan said:

"As a major local employer we are keen to play our part in developing the wider economy through supporting tourism focused events that showcase what the area has to offer."

The free event was broadcast on Sky Sports and Motors TV in the UK and internationally to more than 400 million homes in over 100 countries.

"Powerboat P1 is delighted with its first ever visit to Scotland and the feedback from key stakeholders, local residents and the media has been extremely positive. The Saturday sunshine attracted a crowd of around 22,000 to enjoy the double bill of power boat racing and jet ski action, with several thousand spectators braving the very wet and misty weather on Sunday. The Inverclyde Showcase, featuring more than thirty tourism-related trade stands on the Esplanade, was also a success.

"The local business community has been extremely supportive of this inaugural event, helping us to raise the profile of Inverclyde, attract a sizeable crowd and give a boost to the local economy.

"Once a thorough review and evaluation has been carried out, we will enter into discussions with the co-hosts, Inverclyde Council and Riverside Inverclyde, together with sponsors and partners, and we are very hopeful of returning to Greenock in 2017."

The P1 roadshow now travels south to Gosport in three weeks' time for round three of the UK championship.