It's never been better value to travel on Scotland's west coast ferry network.

That's the message behind a new publicity campaign being launched by operator CalMac after the introduction of Road Equivalent Tariff (RET) across all of the company's 49 routes.

The campaign was kicked off by Scottish Government Minister for Infrastructure, Investment and Cities. Keith Brown during a visit to CalMac's Gourock HQ.

"The roll out of RET brings benefits to local economies and gives the tourist sector a real boost, underlining the Scottish Government's commitment to supporting our island communities." said Mr Brown.

"RET fares will ensure these lifeline ferry services remain affordable for the remote communities that depend on them and makes them even more attractive to visitors who want to get a taste of the fantastic tourist experience out islands have to offer." 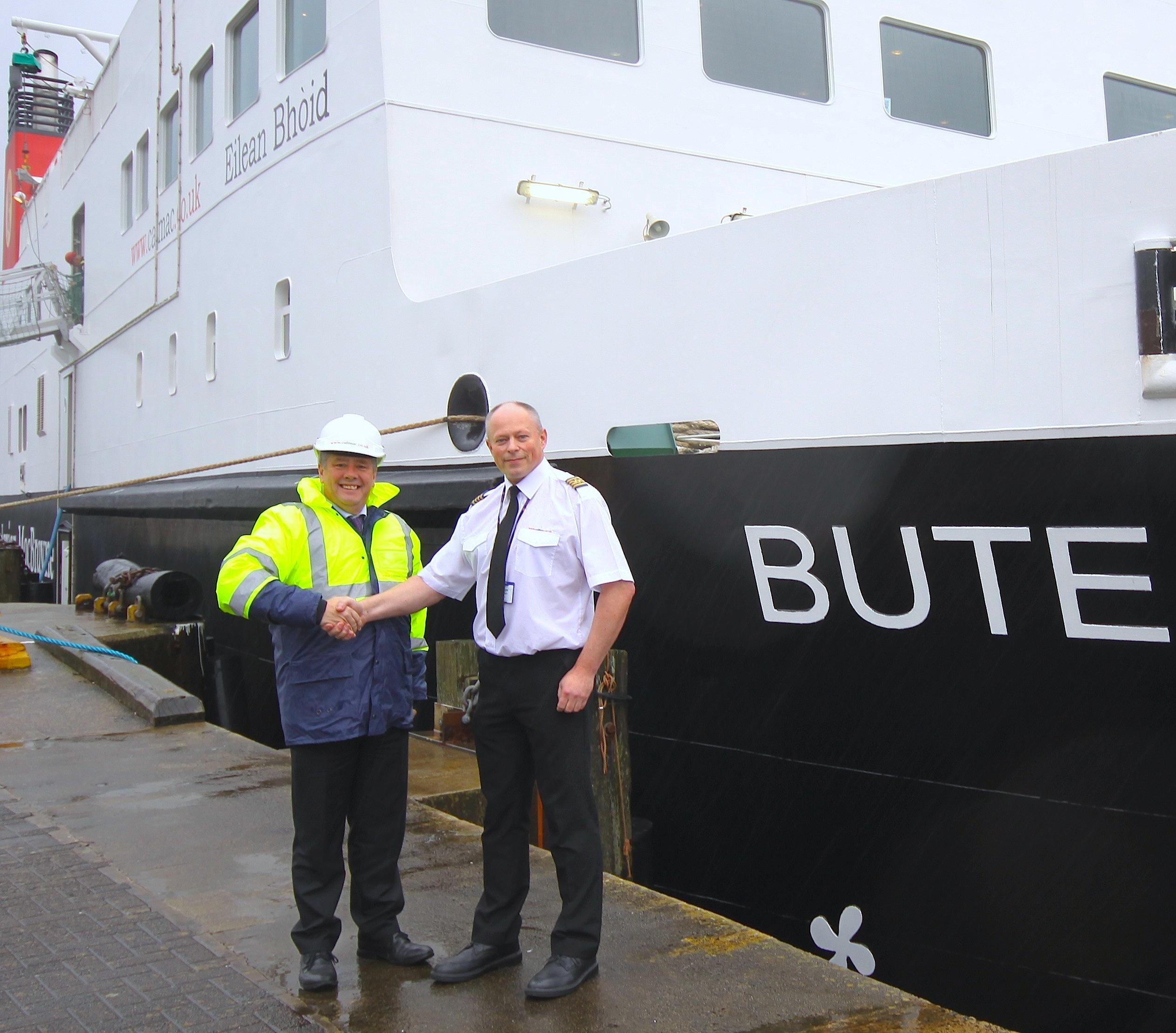 Master of MV Bute, Mark Yeomans (right) welcomes Minister for Infrastructure, Investment and Cities Keith Brown at the campaign launch. The vessel serves the Rothesay run which is one of the latest to benefit from the introduction of RET.

RET matches ferry fares with those of road users for the equivalent distance travelled. Its introduction has seen average fares where it's being introduced drop up and down the West Coast by an average of 40% for passengers and 55% for vehicles over the 2015 summer timetable.

In real terms this means it now only costs £16.45 to take a car from Oban to Mull rather than £56.65. But research is telling CalMac potential travellers are still being put off by perceived high prices.

"As well as reducing the costs for local businesses looking to get goods and services to mainland markets, the cheaper fares are great value for islanders and tourists. The islands offer so many wonderful reasons to visit and these fares will make holidaying on the islands even more attractive for tourists, potentially providing a major boost for the local economy" said CalMac's Commercial Director, Jocelyn McConnachie.

"Our job is to spread the word about just what good value our ferry journeys are. We are an integral part of the communities we serve so know the difference cheaper fares will make not just for island businesses but also for local people that rely on us for a lifeline services."

As part of the campaign CalMac will be simplifying fares and introducing new multi journey tickets.

CalMac operates 31 vessels on routes across the Clyde and Hebrides and is the UK's largest ferry operator, the company was recently named Ferry Operator of the Year at The Independent Travel Awards. The multi media campaign will target markets across the UK and overseas in bid to increase the 4.9 million passengers the company currently carries every year.

New prices and destinations can be found at www.calmac.co.uk