Seabirds from the Ship 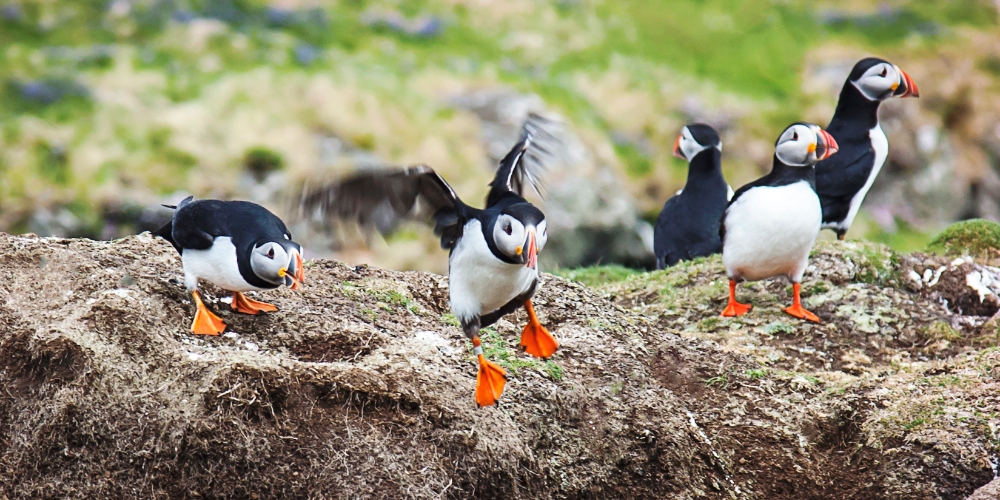 RSPB's Kat Jones explains what to look out for from your ferry journey:

Scotland's fertile seas, wild remote coastlines and islands make it one of best places in the world to see seabirds.  Nearly half of the world's Gannets breed in Scotland, and nearly a third of the world's Manx Shearwaters nest on the Isle of Rum alone!

When heading by ferry to one of the Scottish islands, be sure to keep a look out for seabirds.  Gannets will be the largest seabird you will see; look out for groups fishing by dropping like arrows from the sky. They hit the sea at speeds of over 50 miles per hour, their specially adapted skulls offering them some cushioning against the impact. Gannets nest in a few large colonies, St Kilda and Ailsa Craig being a couple of the biggest.  However, Gannets can be seen almost anywhere because they can travel hundreds of miles from their nest in search of food.

Just like Gannets, other seabirds like to nest together in colonies and are sometimes refered to as "seabird cities".  The scale of these 'seabird cities' can be vast: the noise, the activity and even the smell makes them one of nature's spectacles.  The really big seabird colonies are located on islands and stacks, where birds are safe from predators.  The Shiant Islands, between Harris and Skye, is one such colony which astoundingly is home to 63,000 pairs of Puffin, as well as many thousands of Guillemots, Razorbills and other seabirds!  Look out for the Shiants and for its Puffins on the journey to the Isle of Lewis.  A recent rat-eradication project led by RSPB Scotland offers the prospect of better breeding success for the Puffins and the return of Manx Shearwaters and Storm Petrels to the islands.

The Isle of Rum which is famous for its Manx Shearwaters, nesting in burrows high up on the island's mountains.  In March, around 100,000 pairs return from their wintering grounds located off the coast of South America, you can see them on any of the ferry routes, riding on stiff, straight wings, almost touching the surface of the sea as they search for food!