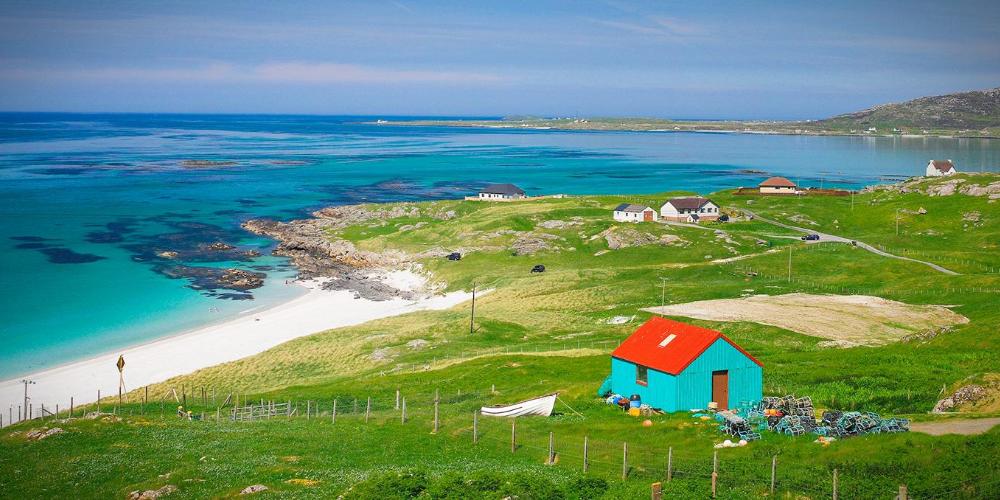 Although Scotland's coastline and islands are littered with wrecks and abound in tales of smuggling, there's not many stories to match that of the ill-fated SS Politician. After all, how many real-life ship groundings have spawned a best-selling book, stage plays, poems, songs, and, not one, but two film adaptions?

Mind you, there's not many stories to match Whisky Galore! - a true(ish) tale involving free whisky, and wily islanders putting one over on the excise man. It's a fable that deserves retelling. And each time it's retold, the legend grows.

The great thing is, thanks to our Hopscotch® tickets, you can island hop in the footsteps of the Customs and Excise officers sent north to retrieve and recover the ship's cargo of whisky. And, who knows, you might even enjoy the odd dram along the way.

With a new film version of Whisky Galore! about to hit cinema screens, it's perhaps time we took a fresh look at the facts, and the story it inspired (one which should be taken with a pinch of salt, and, perhaps, a little water!).

Scotch on the rocks

In 1941, with Britain in the grip of war, the Government was desperate to earn overseas income. One relatively easy way was to increase exports of manufactured goods, including Scotland's national drink. With whisky severely rationed at home, there was more to send abroad.

On February 3, 1941, that the SS Politician set sail from Liverpool, bound for Jamaica and New Orleans, with a cargo including baths, plumbing fittings, pianos, art silks, motor parts, bedding, and furniture. More importantly, the ship was also carrying 28,000 cases of malt whisky. That's a staggering 336,000 bottles. More than enough to float your boat!

With the normal sea lanes haunted by German U-Boats, the captain decided to go the long way around. A decision which cost him, and the excise man dear.

Just two days out, and in the face of a gale, the Politician ran aground off the island of Eriskay, in the Outer Hebrides, and later broke in two near the islet of Calvay.

The crew were rescued by islanders - and when they let slip what their cargo was, it sparked a gold rush.

Making a living had never been easy on Eriskay (Scottish Gaelic: Èirisgeigh, from the Old Norse for "Eric's Isle"), which lies between South Uist and Barra; it was a hard-scrabble existence split between fishing and farming. And in 1941, with many of the island's young men away at war, times were particularly tough. Add in a distinct lack of whisky - uisge-beatha (the water of life) - and you'll understand the islanders' eagerness to 'liberate' the cargo. No islander regarded it as stealing; for them the rules of salvage meant that once the bounty was in the water, it was theirs to rescue.

Mind you, they took some precautions. The men, wearing women's dresses to keep their own clothes from being covered in incriminating oil from the ship's holds, launched a series of night-time raids on the vessel.

As news of the whisky spread across the Hebrides, boats and men came from as far away as Lewis to gather and share the unexpected bounty from the sea.

And it wasn't only bottles of whisky they filled their boats and pockets with. Soon those new 10 shilling notes were turning up in tills from Aberdeen to Liverpool. By 1958 the Crown Agents reported that 2,329 of those notes had been presented in banks as far afield as Ireland, Switzerland, Malta, Canada, the US, and Jamaica.

Only one man on the island wasn't happy with what he was witnessing - the local customs officer. Charles McColl was incensed at what he saw as outright thievery. None of the whisky had paid a penny of duty, and he railed against this loss to the public purse. McColl whipped up a furore and made the police act.

As news of the event spread, and more islanders began to help themselves to the hoard, the Government acted. As soon as the weather allowed, Eriskay was besieged with customs officials, insurance agents, the Army, and legitimate salvage companies. The custom officials were not well received and one agent was refused accommodation by most of the islanders.

Villages were raided and crofts overturned. Bottles were hidden, secreted, or simply drunk to hide the evidence. And thanks to the island's small size and rudimentary telephone system, the islanders were usually at least two steps ahead of the authorities.

McColl and the police caught plenty of locals red-handed, and they were sent to trial, with some being sentenced to up to six weeks' imprisonment in Inverness and Peterhead.

At sea, salvage attempts did not go well, and it was eventually decided to let the Politician remain where she was. McColl, who had already estimated that the islanders had carried off 24,000 bottles of whisky, ensured that there would be no more temptation. He applied for, and was granted, permission to explode her hull.

The islanders watched this extraordinary action, their emotions summed up by Angus John Campbell, who commented: "Dynamiting whisky. You wouldn't think there'd be men in the world so crazy as that!".

It was English-born author Compton McKenzie, a former First World War spy, who brought the tale of the SS Politician to a worldwide audience. In 1930, he had built a house on Barra, so, by the time of the incident, he was almost a local. He certainly sampled some of the illicit cargo.

Amused by what he saw going on around him - seeing it as a parable about the little man facing down big government - in 1946, he put pen to paper, writing Whisky Galore!

Changing the name of the ship to the SS Cabinet Minister,and the names of Barra and Eriskay to Great Todday and Little Todday, the book, published in 1947, became an instant bestseller.

Within two years, London's Ealing Studios had produced a comedy film of the book, featuring as extras many islanders who had had a hand in the real events. With whisky and food rationing still in force in Britain, the film proved a huge hit, not only here, but in America (where a ban on alcohol promotions saw it retitled Tight Little Island).

Since that time, the odd bottle of Politician whisky has washed up on Eriskay, or been retrieved by divers. Mind you, if every bottle claimed to have been recovered had come from the real cargo, the SS Politician's holds must have had the capacity of Noah's Ark.

Put yourself in the picture

Following in the footsteps of the story is easier today than it was in 1941. The main CalMac route to Barra is by ferry from Oban, on the mainland. The crossing takes 4 hours 50 minutes.

These days the island boasts its own pub, named of course "Am Politician". Pay a visit and you might bump into Donald MacLeod, son of the 1940s ferryman who, giving plenty of advance warning to his fellow islanders, carried the police and customs men to and from the island.

There, with a dram in hand, you can see some of the original bottles that were salvaged from the ship. Sadly, they are now empty, but the whisky they once contained still feeds the mind and the imagination, spiriting visitors back to the days when there really was Whisky Galore!