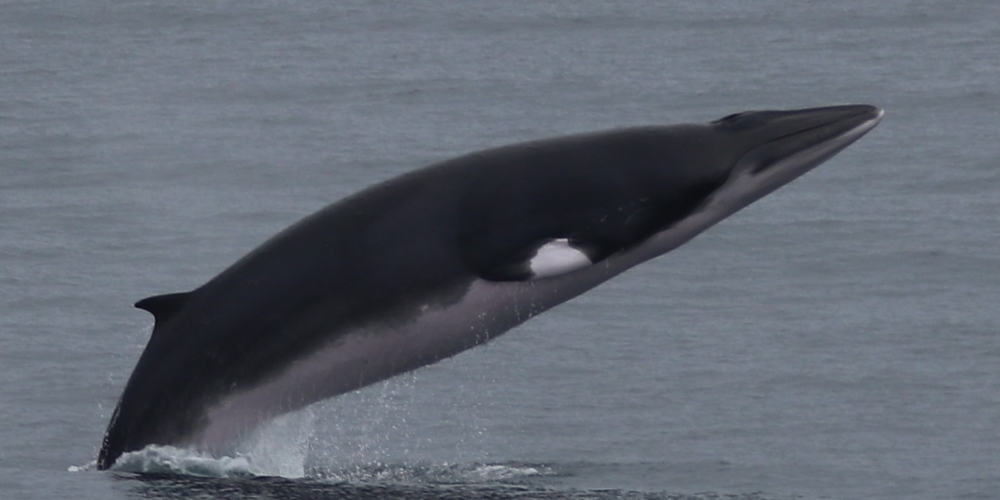 The amazing weather that we have experienced here on the West Coast of Scotland during the first half of the summer season has showcased the fabulous marine wildlife of the region to passengers on two CalMac routes in particular.  Both the Oban to Coll and Tiree and the Oban to Barra routes have been especially productive with basking sharks, common dolphins, Risso's dolphins and minke whales turning up.

Sunshine, like we have had, warms the upper surface waters (the euphotic zone) of the Hebrides seas and sunlight provides the energy for photosynthesis which allows phytoplankton (plant based plankton which is the primary producer at the base of the ocean food web) to increase.  The more phytoplankton in our seas, the more food there is for zooplankton (microscopic animal plankton) to eat which in turn are fed on by basking sharks and the small shoaling fish such as herring and sandeels that minke whales like to devour in Scottish waters.

The best places for phytoplankton production are on the edge of tidal mixing or areas of upwelling of nutrients which provide the minerals that the plankton need.  It is no coincidence that two of the most productive areas this late spring and early summer have been in areas where this process takes place such as Hawes Bank on the way to Castlebay, and Coll and Tiree, particularly around Gunna Sound between the two islands.

The first real confirmed basking shark sighting of the season was on 16th May and captured by Captain Byron Phillips of CalMac vessel Lord of the Isles as it travelled through Gunna Sound on the weekly Coll/Tiree to Barra schedule.  Captain Phillips managed to take a great photo from the bridge of the ship of a very large basking shark quietly hunting with its mouth wide open.  The mouth of a full grown basking shark can reach 3 feet wide and can easily filter tons of plankton filled water in minutes as the gentle giants cruise at the surface.  Their oily liver (which works as a buoyancy aid) was once highly sought after and thousands were hunted in Hebridean fisheries in years gone by.  During the Second World War they were even sometimes used by Hurricane fighter pilots for target practice!  Today these sharks are classed as endangered in the North East Atlantic and thankfully it is now illegal to kill, disturb or harass them in UK waters.  It is a real privilege to still welcome them into Hebridean waters each year and the region is regarded as an international hotspot for the species.

The minke whale is also being sighted regularly on the same two routes as the basking sharks. This marine megafauna is not a shark but a mammal.

The average minke whale is 8-10 meters and is classed as the smallest of the great baleen whales.  They visit our waters from spring to autumn and the Hebrides has to be the best region in the UK to encounter these amazing creatures.  Whilst here they are feeding on herring and sandeels and we have also seen a number of youngsters in the region this summer.

When we see a group of magnificent white gannets plunge diving into the ocean or numerous manx shearwaters feeding on the surface we always train our binoculars on the area in question and very often our patience will pay off when having herded the fish into a ball and pushed them closer to the surface, much to the delight of the seabirds, the whale surfaces to take a breath.  If you are ever lucky enough to get close to one of these fabulous whales you might just see the white flashes on its pectoral fins that it uses as an interesting feeding adaptation.  As it circles a school of fish the fish see the white flashes from the whale's fins and assume that there is more than one animal hunting them.  As a result they bunch together for protection making it easier for the whale to lunge at their prey and take a huge mouthful of fish filled water; if the fish realised that there was only one animal hunting them their defence strategy would be to actually split up and disperse.

More often than not we just see the whales gently surfacing in the distance.  Their blow is too small to be seen on most occasions but the dark roll of their back followed by their curved dorsal fin is distinctive.  In recent weeks we have started to see the spectacular behaviour that they exhibit when they breach right out of the water.  There are a number of different theories as to why whales exhibit such behaviour and no doubt there are more than one reasons why they do this but communication seems a very likely factor.  The ORCA survey team and the crew of MV Isle of Lewis had a wonderful view of this on their last survey from Barra to Oban.  A large minke, possibly a female, breached numerous times close to the bridge of the ship.  Not long before this we had recorded a juvenile close by. Was this female communicating with her offspring?  It is certainly possible, yet we can only speculate.  But that is one of the fascinating things about cetacean behaviour - we have so much to learn and it is entirely likely that they themselves also have a huge amount to teach us as well!