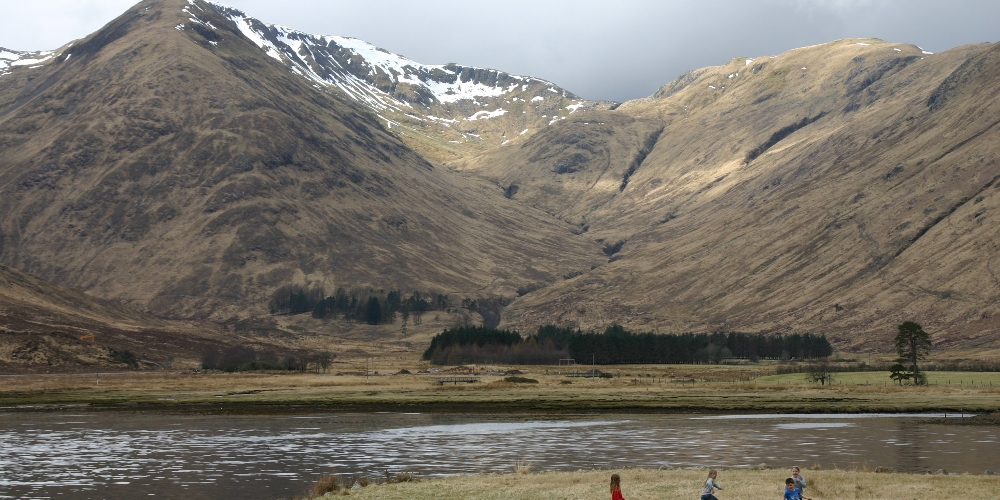 We sent travel writer Robin McKelvie and his family on an exciting island hopping adventure from Oban to Craignure on Mull and over to the Morvern and Ardnamurchan peninsula.  Find out how they got on with tips and hints on how to have a memorable break with a difference to the Inner Hebrides.

"It's the best bowl of cornflakes I've ever had," beams my ten-year-old daughter Tara. My muesli is pretty spectacular too, washed down with a view of a couple of otters splashing in the water right below our lodge and the mighty stag who has just ghosted by the window. Welcome to Morvern, a deeply dramatic escape for all the family, especially if you arrive and leave by ferry via Mull while island hopping in Scotland.

Over the Sea to Mull

Our adventure began on a CalMac ferry, a fun part of any trip touring Scottish islands by car.As a travel writer I've been lucky enough to enjoy hundreds of ferry sailings across the world and hand on tartan heart I reckon Oban to Craignure on Mull is up there with anything else on the planet.

We eased out of Oban Bay and enjoyed a tasty and healthy lunch in Mariners cafeteria onboard before hitting the decks to look out for our marine mammal cousins. First a couple of porpoises broke the surface and then a pod of common dolphins. All that before we'd even enjoyed the view of Duart Castle as we entered the Sound of Mull.

"Is Morvern an Island Daddy?"

A ten minute drive brought us to Fishnish, where another CalMac aquatic chariot awaited to ease us over to Lochaline on Morvern. We were straight on deck and were rewarded with cormorants and guillemots in the skies and another splash of porpoises en route to Morvern.

As the hulk of mountain clad Morvern loomed into view my youngest, seven-year-old Emma, asked "Is Morvern an island?". I can see why she asked as this remote mainland peninsula feels set adrift from the modern world and with two ferries to get here it really does feel like an island.

Our base on Morvern was ideal. It lay deep in the remote Rahoy Estate. Caorann sleeps a maximum of eight in serious comfort and it had plenty of space for the other family we met up with on Morvern. My bedroom had a glorious bath with hill and loch views and the massive main living space had a whole gable wall of glass with epic views. Thanks to a wood-burning stove it was a warm, welcoming oasis we could all spend time in together.

On holiday it's always good to ditch the car. We did on our second day, just exploring the sprawling Rahoy Estate. We yomped along the shore looking out for otters and spotted a curious seal popping his head up, which delighted my girls.

That delight turned to wild whoops when no fewer than three mighty golden eagles appeared soaring on the thermals like giant gliders above, much bigger than the buzzards we see at home. We hiked up to the site of an old hill fort and talked about the people who used to live here and the marauding Viking longships that would once have sailed in below us.

Out and About in Morvern

On our last day on Morvern we savoured the scenic drive over to the peninsula's east coast to the Kingairloch Estate. Here the Boathouse Bistro awaited. Along with the Whitehouse in Lochaline, it's a fine example of the new breed of restaurants that are popping up all over the West Coast with fine local produce to the fore.

It was a Sunday and they had roasts on. No ordinary roasts either as I enjoyed venison from the estate, whilst mummy and the girls opted for pork, also from Morvern. The staff were great with the kids. They also loved running around on the shore outside between courses. With no traffic they could run free without us worrying.

On the way back we stopped off at Aoineadh Mòr, where the tragic history of Morvern came alive. The wee village here was cleared of crofters in the nineteenth century. You can walk amongst the ruins of the blackhouses where they lived. The girls liked the audio station that told the story of what happened here from the point of view of one of the evicted women, rather than just daddy explaining it all.

Back Over the Sea to Mull

The girls weren't keen to leave Rahoy and their newfound friend 'Mr Bob', the pine marten who sneaked up to our windows at night in the search of scraps. But we were Mull bound via the neighbouring Ardnamurchan Peninsula. One of the great things about travelling about Scotland by ferry is that each adventure opens up yet more possibilities for your next trip. I resolved to bring the girls back to Ardnamurchan in search of the lighthouse that sits on the westernmost fringes of the UK mainland and the starched white sand beaches I know lie close by.

After leaving the Archnamurchan road behind we arrived at Kilchoan, where our third ferry awaited, this time to spirit us back across to Mull. We chugged across the Sound of Mull and had a serious stroke of wildlife luck as we caught sight of a hulking sea eagle.

Mull - An Island for All the Family

Our base on Mull was Tobermory. Sorry, my daughters won't forgive me for getting its name wrong. It should of course be Balamory! The BBC TV series was famously set here and you can see why as its pretty pastel hued houses are strung like a necklace around the bay. The main street is awash with wee shops, a chocolatier and cafes. We love the fish and chip van that sits here in the warmer months. My kids tucked into fish and chips, while daddy enjoyed a king scallop supper!

The next day we headed for one of our favourite beaches in Scotland. That is really saying something, as I've been to over 100 countries and Scotland's beaches are unbeatable. Today it was Calgary Bay, a glorious swathe of white sand fringed by rugged hills. There is nothing here bar a little wild camping site for families on a budget. We lost hours enjoying that there were more seals than people.

All too soon our adventure drew to an end with the drive back to Craignure and our last ferry back to Oban. We savoured our last local produce feast in the Mariners cafeteria. I allowed myself a wee celebratory dram of Tobermory single malt as a toast to a family island hopping trip that had it all, from wildlife to great food, from epic scenery to fun ferries.

What are you waiting for? Get on the CalMac website to browse more about the Morvern peninsula and start book your own island hopping holiday today!