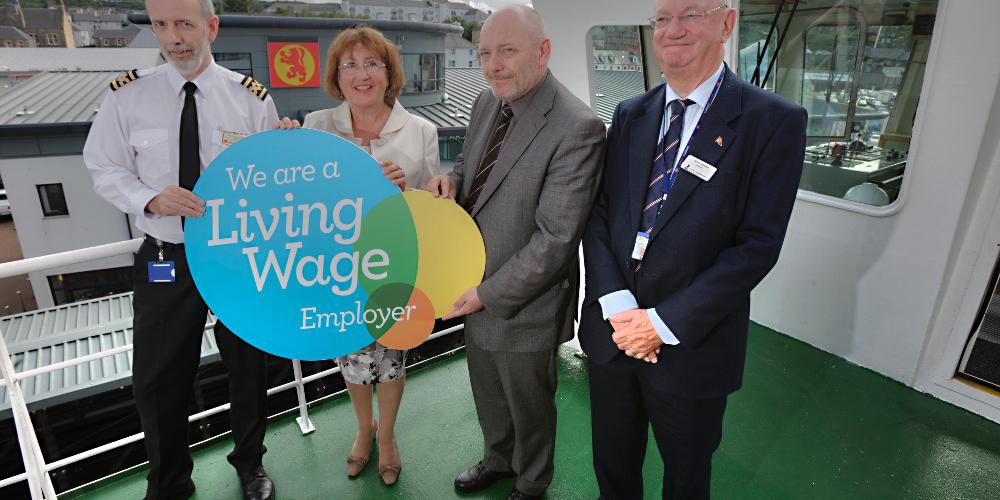 Caledonian MacBrayne (CalMac) has become the first ferry operator in the UK and the first major transport company in Scotland to achieve Living Wage accreditation.

The accreditation has been earned by David MacBrayne Limited - CalMac's parent company - underlining and enforcing the company's commitment to its 1450-strong staff, many of whom live and work in remote and/or economically fragile areas around the Scottish west coast. It also ensures Argyll Ferries' employees are covered by the pledge.

The award has been warmly welcomed and endorsed by Annabelle Ewing MSP, Minister for Youth and Women's Employment.

The accreditation is made by the Poverty Alliance on behalf of the Living Wage Foundation and involves rigorous interrogation of a company or organisation's pay structure both to its own employees and any contracted workers.

All employers will be expected to comply with National Living Wage (NLW) legislation by 2020, as announced by the Chancellor of the Exchequer in the recent Westminster budget.

Working with the Poverty Alliance, the accreditation process involved Caledonian MacBrayne proving not only that it pays its own employees the Living Wage or above, but also making the commitment to ensure regular company contractors also comply. Thereafter the Living Wage and accreditation are reviewed annually.

Minister for Youth and Women's Employment, Annabelle Ewing MSP, said: "CalMac Ferries Limited plays a vital role in island life, operating a lifeline ferry service and providing employment for the communities of the Clyde and Hebrides.

"Staff are at the heart of this organisation, from the crews manning the vessels and ports to the kitchen staff making the famous CalMac breakfasts, so I'm pleased to see CalMac recognise this by becoming a Living Wage employer.

"The Scottish Government is committed to fairness and supporting those on the lowest incomes. We recognise the real difference the Living Wage can make to working people and are leading by example by becoming the first accredited government in the UK earlier this year.

"Research shows that the Living Wage can enhance productivity, reduce absenteeism and improve staff morale but we need even more organisations to recognise the benefits and sign up for accreditation and help those on the lowest pay.

"I congratulate CalMac on becoming the latest organisation to receive Living Wage accreditation and hope that even more follow its example."

"It is absolutely right and proper that CalMac's employees should earn a Living Wage," said managing director Martin Dorchester. "It is something we were already doing with our staff and gaining accreditation simply formalises our commitment to this.

"A recent independent study by the Fraser of Allander Institute into CalMac's social and economic impact across the network found that its staff earn 12 per cent more than the Scottish average. This reflects not only the importance we place on ensuring our staff - often in areas where job opportunities can be limited and also low paid - are financially recognised fairly for their work, but that they can live well within the prevailing financial climate.

"The same study also found that a CalMac employee typically has 13.6 years' service with the company - an indicator of the fact that, for many years, the dignity afforded by a good wage has added up to commendable retention and loyalty for which we are both appreciative and proud.

"In an ideal world companies should not have to wear a badge to let others know it is doing the right thing by its staff, but if by wearing this badge CalMac can persuade others to follow suit and reward their staff properly, then this can only be a good thing."

"Congratulations to Cal Mac on joining over 300 accredited Living Wage employers in Scotland," said Peter Kelly, director of The Poverty Alliance. "As the first ferry company to become accredited, CalMac is leading the way.

"With over half of children in poverty in Scotland living in a household where someone works, paying the Living Wage is now more important than ever.

"We hope to see more employers following in CalMac's steps in the coming weeks and months."

The Living Wage, as set out by the Living Wage Foundation, should not be confused with the National Living Wage (NLW) detailed recently in the Westminster budget. The NLW is, effectively, a structured increase of the minimum wage, with the incremental rise beginning next year and continuing until 2020, when the NLW will be £9 for those 25 and over - it is less for younger people. The minimum wage becomes NLW next year at £7.20.