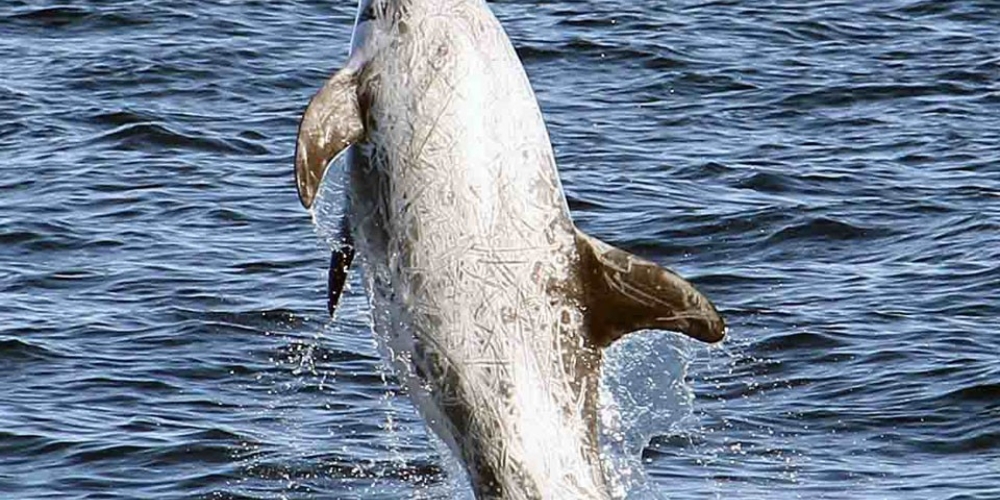 For this episode of the fact file series I will tell you all about this unusual looking species called the Risso's dolphin (scientific name: Grampus griseus). The species is named after the naturalist who first described it, Giuseppe Antonio Risso (1777-1845), who must've thought what on earth are these strange marked beasts!

This dolphin has a wide distribution in temperate, tropical and subtropical waters of the oceans of the world between the latitudes 60° north and 55° south. In the northern hemisphere, Scotland is the limit of its distribution. Young dolphins have a metallic grey or brown skin in the dorsal area and whitish in the belly. As they grow, the coloration fades, and the adults appear to be almost white. This is due to the presence of scars on the back and sides, these are often caused by socialising with one another which involved rubbing or scrapping and the scars from battles with their main prey, squid who have sharp beaks. They often forage food at night, diving up to 1,000 m, when the prey travels to the surface of the ocean, in what is called a vertical migration. Did you know, their teeth only serve to hold their prey firmly, as this dolphin swallows its victim's whole!

Now, here is an interesting theory! In 2018, an individual that shared characteristics of a bottlenose dolphin and a Risso's dolphin was seen near Butt of Lewis Lighthouse, Isle of Lewis, in the Outer Hebrides. This may be hybridisation, where two species breed to produce live young e.g. if a horse and a donkey breed a mule is the offspring. Potential hybridisation between free ranging Risso's dolphins and bottlenose dolphins was first reported off north-east Lewis where seven sightings of atypical (meaning not normal or not typical) dolphins were photographed in the area between 2010 and 2013. How can we tell this may be hybridisation? Well, the shorter beak and steep forehead along with a larger dorsal fin was observed. Risso's and bottlenose dolphins have been seen together previously and this may be proof that these encounters are still happening.

The majority of UK sightings of Risso's dolphin occur along the west coast of Scotland and the Outer Hebrides. This is likely due to the location of the prey species, being closer to the continental shelf, where upwellings create vast amounts of prey. Risso's dolphins are faithful to these areas of the Scottish seas, returning year after year. Some studies have also recorded considerable numbers of juveniles and calves, suggesting that these areas may be being used as a breeding and calving area for the species.

The Risso's dolphin is also a Priority Marine Feature in Scotland's seas and has recently been included in one of four additional Nature Conservation Marine Protected Area (NCMPA) proposals for designation to complete the Scottish Marine Protected Area (MPA) network. The partnership between CalMac Ferries and ORCA is vital in monitoring this species and ensuring the protected areas are effective and if not, providing evidence to improve these sites and connectivity between areas.