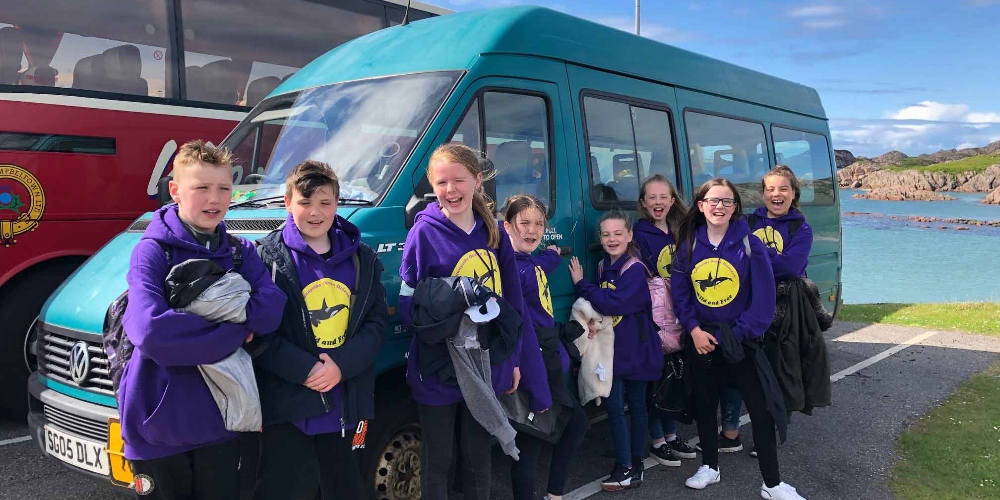 Auld Aggie heard the clunk clunk of the metal gangway as she drove back ashore from the best week of her 16 years.  Rescued from the scrap heap a few months previously by a group of Primary Schools, she thought her twilight years as a mini bus would be served out doing runs to the local pool or short hops to visit Glasgow's museums.  It'd be the end of her adventures... or so she had thought.  For Aggie hadn't reckoned on one of those schools being Sunnyside School of Conservation.  A school who in 2014 decided that conservation was going to be the catalyst to boost learning and skills development in its curriculum...oh, as well as saving the planet of course. 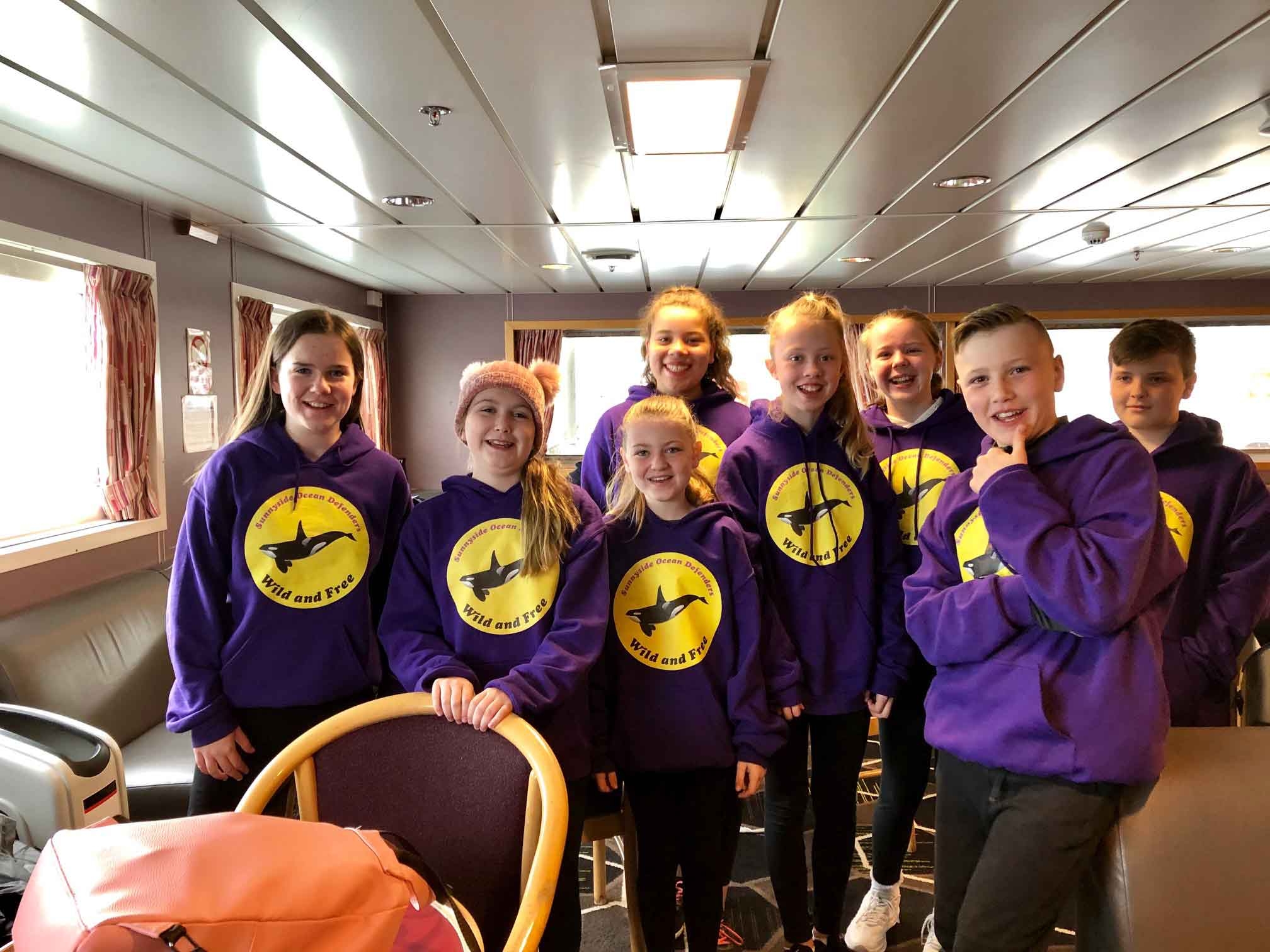 Sunnyside's cohort of classes include Botanists, Ornithologists, ReWilders, Wildlife Warriors, Polar Explorers and the group she had taken on this adventure, the Sunnyside Ocean Defenders.  A group of campaigning P7s who have been working to protect our marine environment over the years. 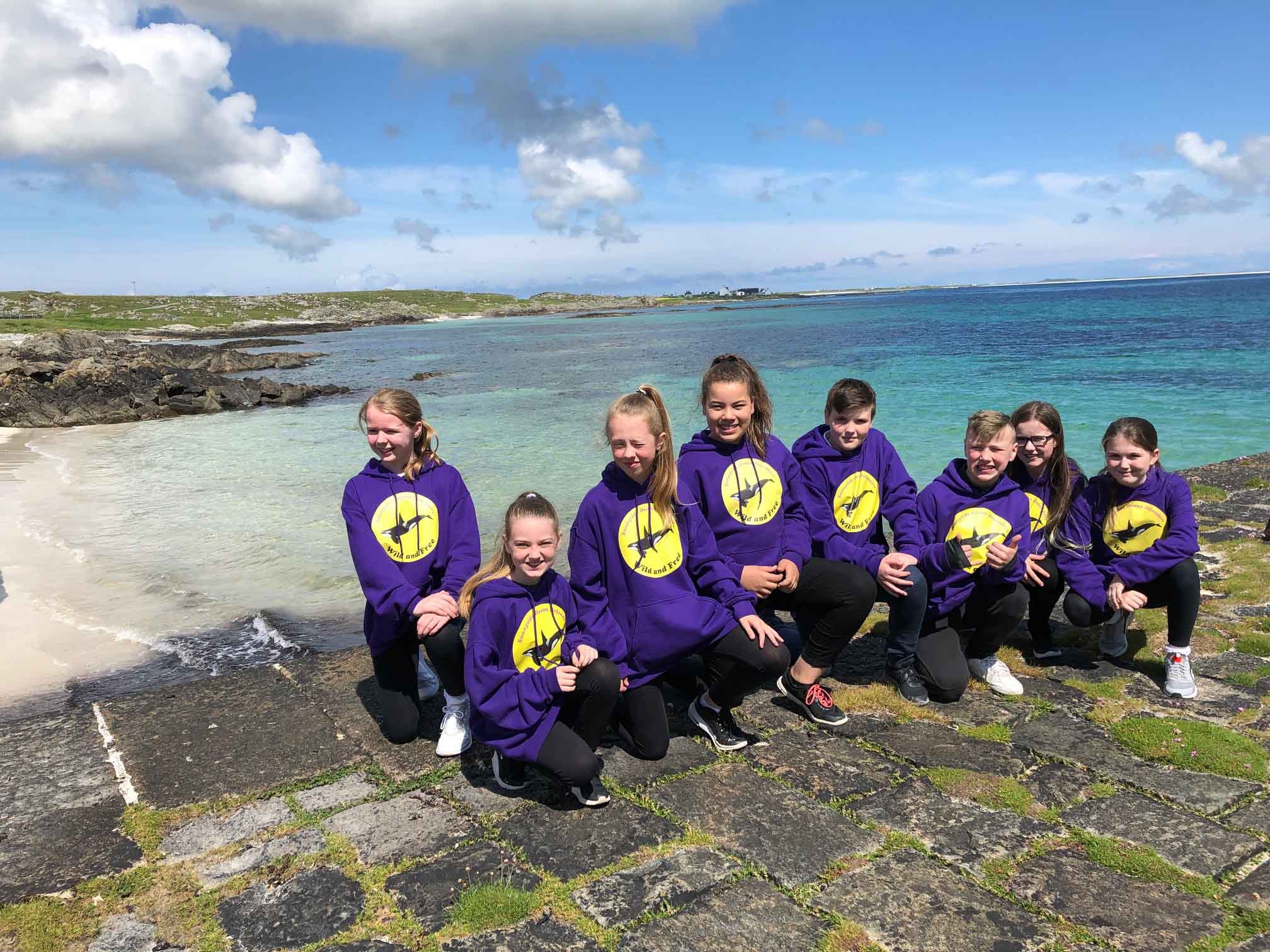 The week had started with a very early morning ride to Oban's port.  Bright eyed and bushy haired the group clambered onto Aggie for the short ride down to the ferry. Auld Aggie didn't mind the early start, infact, she was excited, she'd never met a ferry before.  She'd been expecting something wee, with wings and at least a sparkly wand, so the huge black, red and white hulk waiting to carry them to sea was unexpected but looked like it knew what it was doing.  Taking advantage of an extra long yawn the vessel was having, Aggie had driven her charges on board. 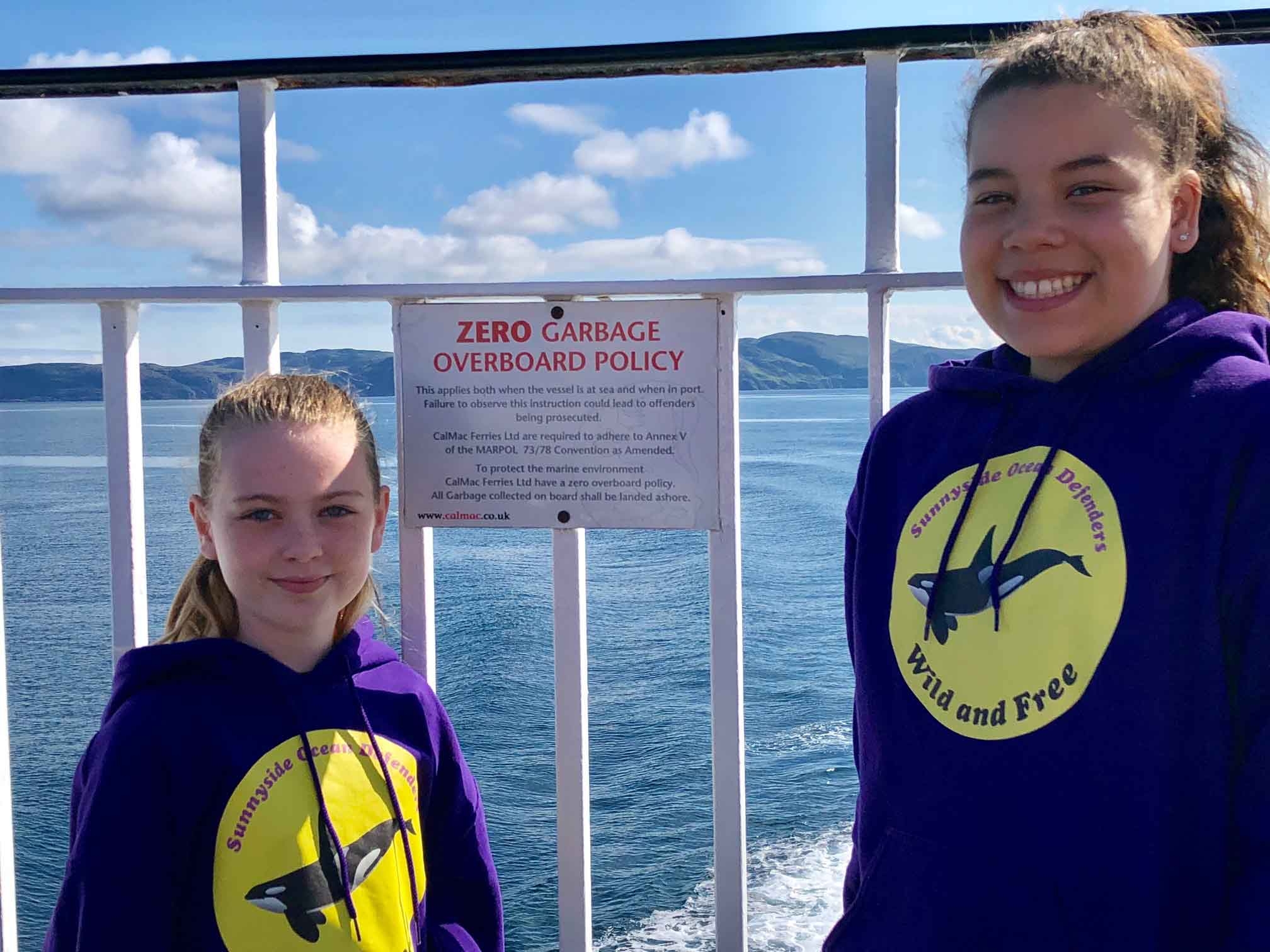 The Ocean Defenders on the other hand were no strangers to ferries, thanks to Cal Mac who'd been a bit of a ferry godmother to them on their previous campaigns of #NaeStrawAtAw and #PrettyDeadly.  They'd first written to Cal Mac about having plastic straws on board their fleet in 2017 and were delighted when Cal Mac backed the campaign, swapping to paper straws and funding the ferry travel as the Defenders took their campaigns to Mull and Arran. 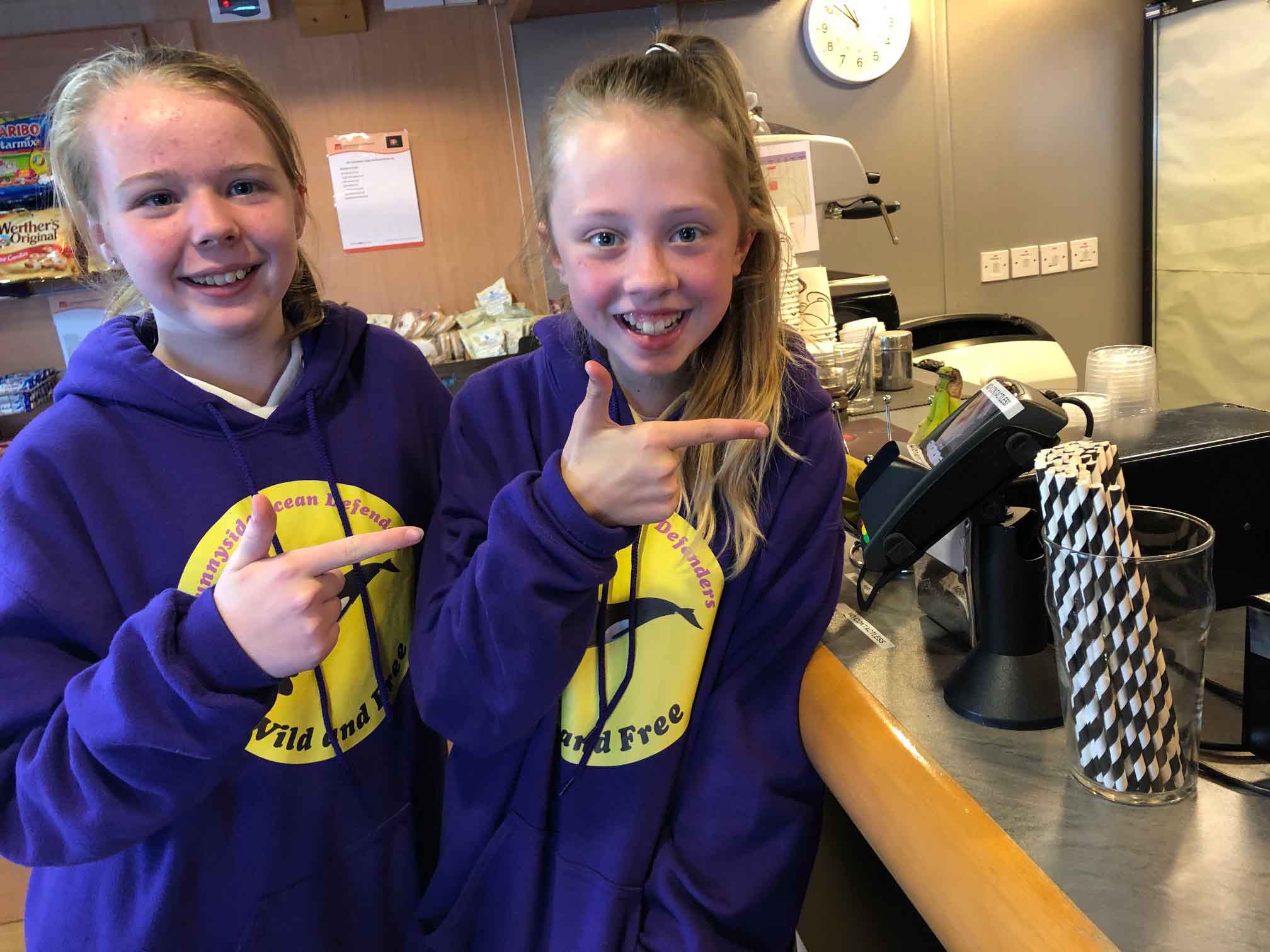 Now in 2019, Auld Aggie and her purple hooded Ocean Defenders had set their sights on taking their latest campaigns to the Inner Hebrides.  A chance chat at the International Marine Conference with marine activists from Oban and Tiree had led to a wish of A 'Wild and Free' tour of island hopping, beach cleaning and taking their latest #SparkleDebacle and #DrainCampaigns to new shores.  Again, Cal Mac stepped up and supported the tour to Oban, Tiree, Mull and Iona. 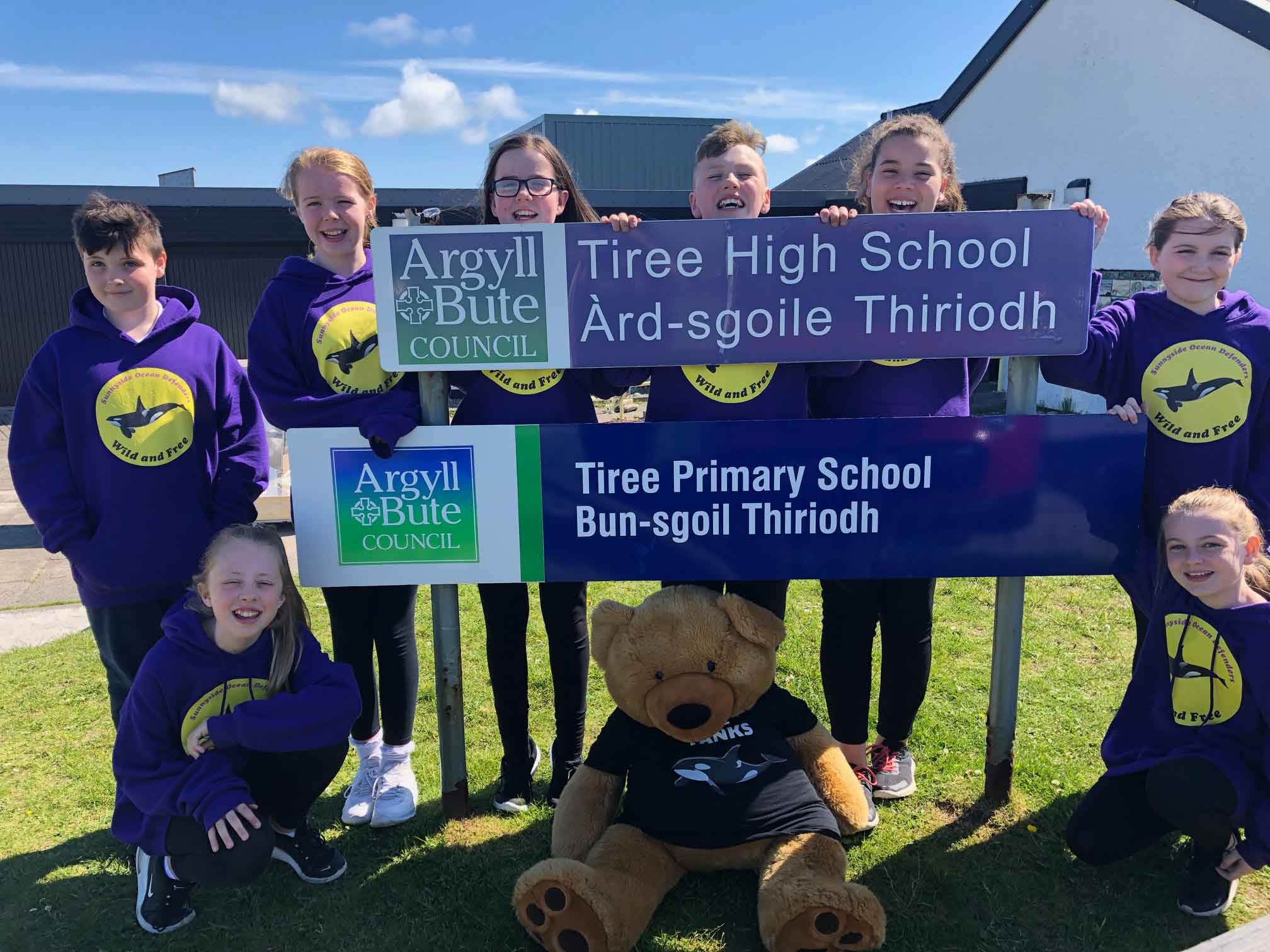 The week had seen the Ocean Defenders make new friends and deliver workshops and presentations to children.  Showing them how to make an alternative to plastic glitter and helping them chalk ocean scenes around their playground drains to remind us of where our dropped litter can end up.  The white sandy beaches were beautiful but like beaches worldwide, relied on local heroes who clean away plastic pollution.  The Ocean Defenders were happy to lend their little hands to help with this big issue. 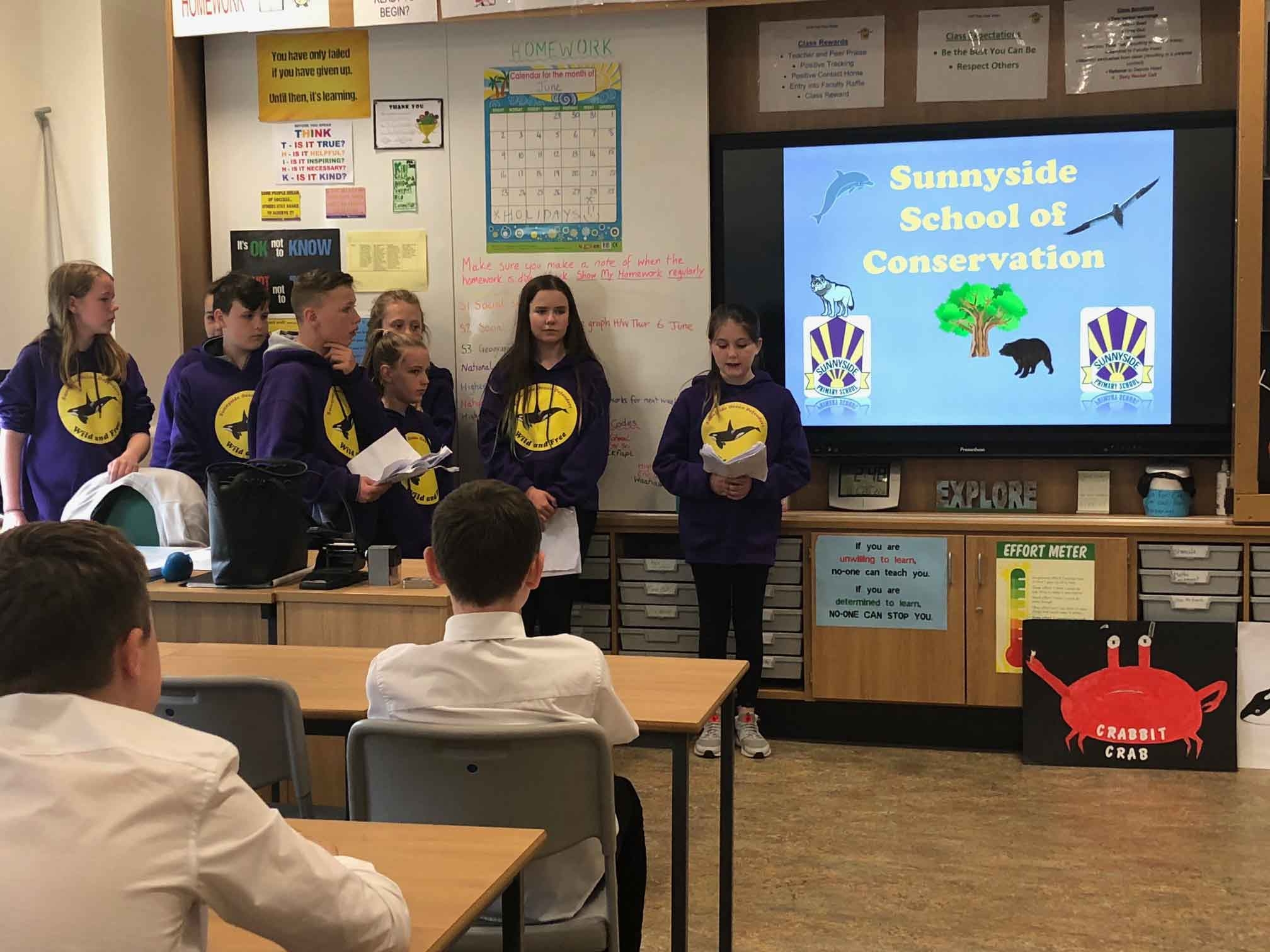 These hands had also decorated stones for Lulu, a West Coast Community orca who had washed ashore a couple of years ago in Tiree.  She had scars which indicated she'd been entangled in fishing gear and her PCB levels were off the chart. Working with John Bowler from the RSPB, the children left stones for her and the pod at Crossopol.  It was important for the children to acknowledge that her story will not go untold. 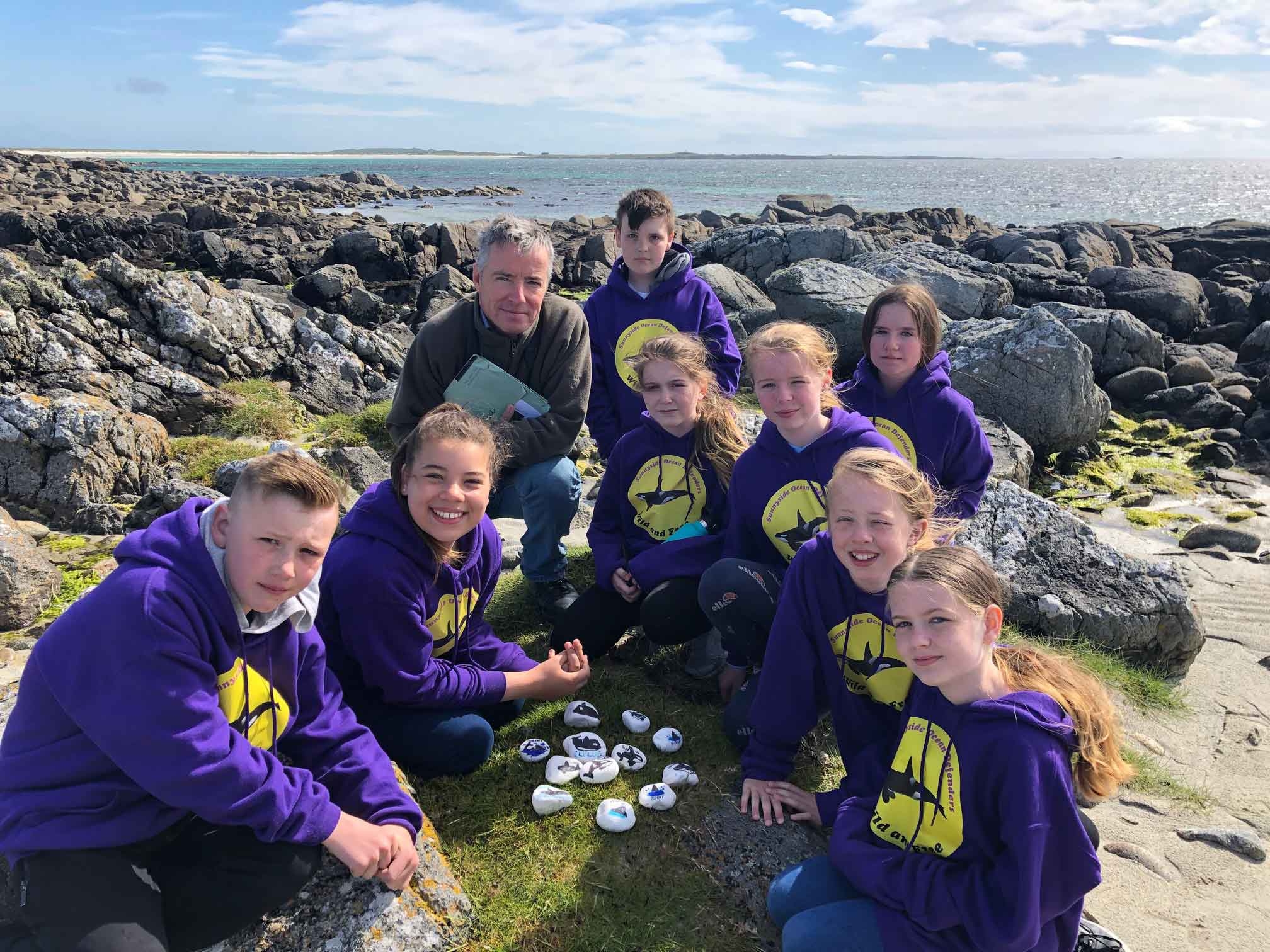 Another highlight was getting to meet up with Dave Sexton on Mull and hear about the reintroduction of the white tailed eagles to Scotland.  Being able to see an eagle sitting on the nest was a moment the children will keep with them forever.

Seasoned sailors by the end of the tour, the Ocean Defenders had kindly been given cetacean ID kits from Andy Gilbert who is part of the Orca Wildlife project aboard Cal Mac vessels, so time was spent on deck watching for fins and flukes.  A few splashes but no confirmed sightings for these citizen scientists...this time. 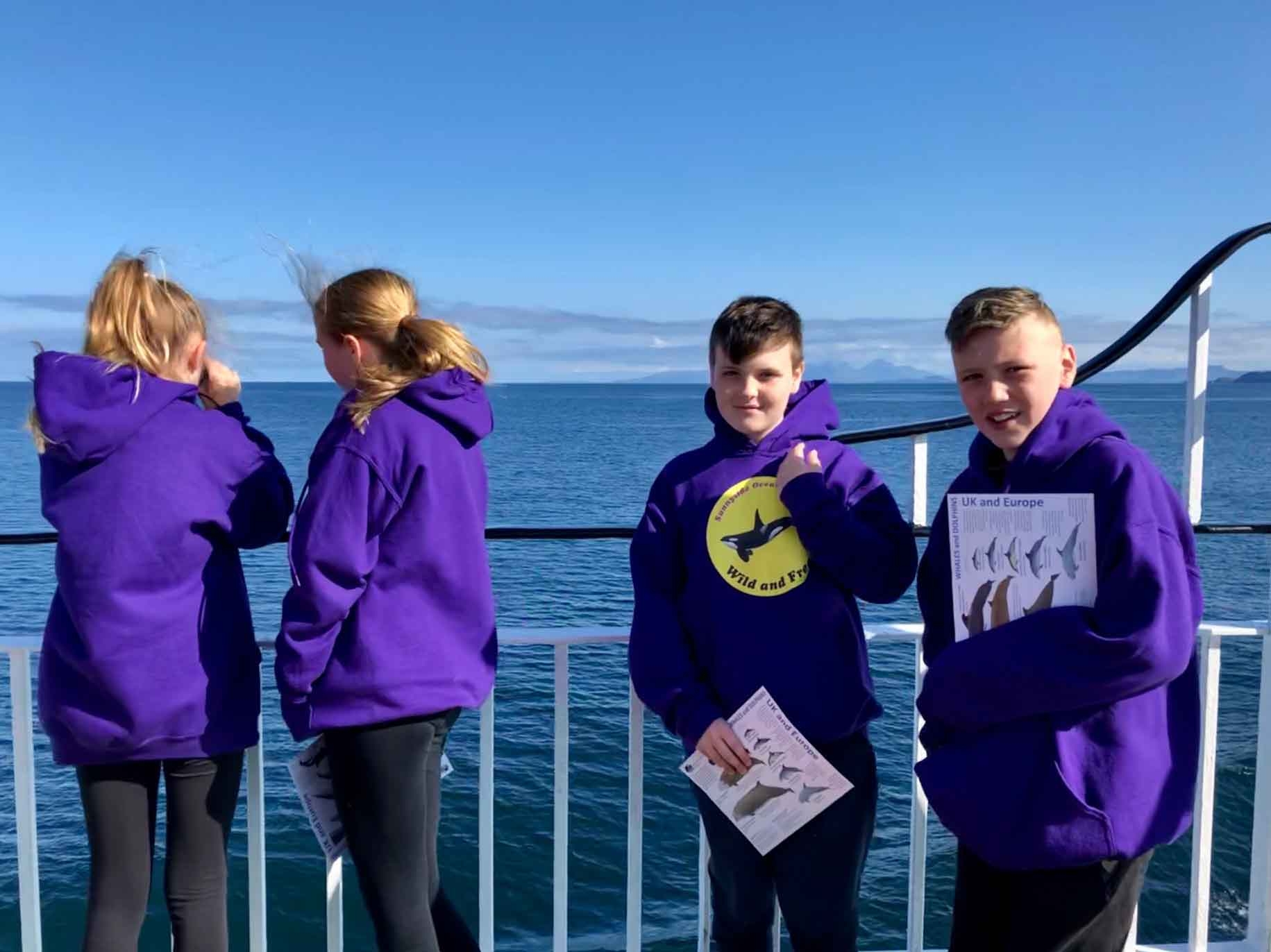 Auld Aggie could still feel the sand in her treads as she carried her crew homeward on the final stretch to the East End of Glasgow.  Excited chatter of their favourite moments filled the mini bus; 'Splashing in the sea in Tiree'; 'Getting the wind in my sail on the loch'; 'Meeting new friends and knowing we've passed our message on.'; 'Leaving stones for Lulu, John Coe and the pod'; 'Seeing the houses in Tobermory.' 'Knowing that wee schools like Iona Primary are so cool.  Look at where they live.'; 'Knowing that if we try we can make a difference, look at the white-tailed eagle being brought back from extinction.' 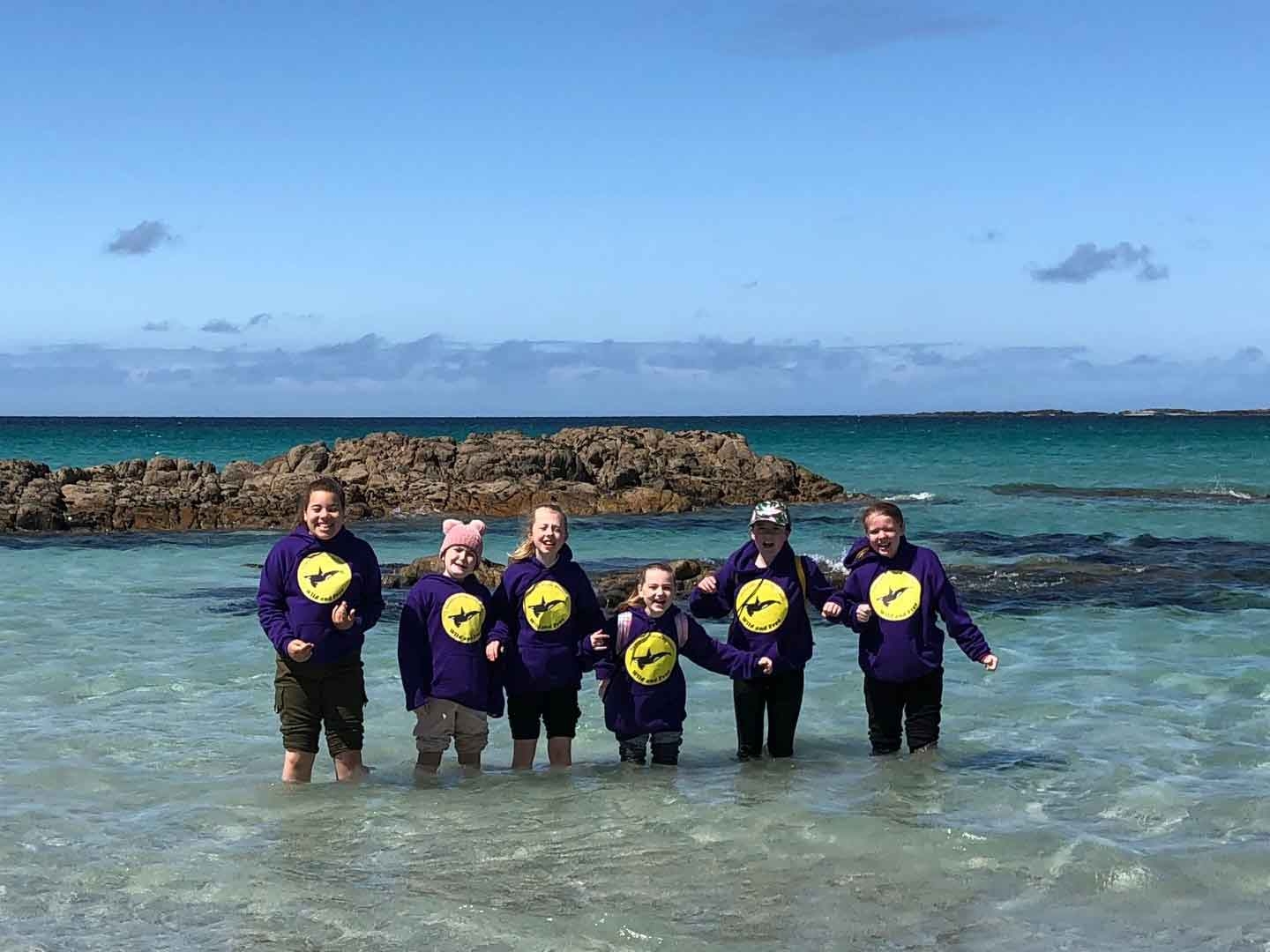 And Auld Aggie's final take from the week: 'The ferries we met might not have had a magic wand, but they were still able to make the Ocean Defenders'...and one rickety old vehicle's... dreams come true.' 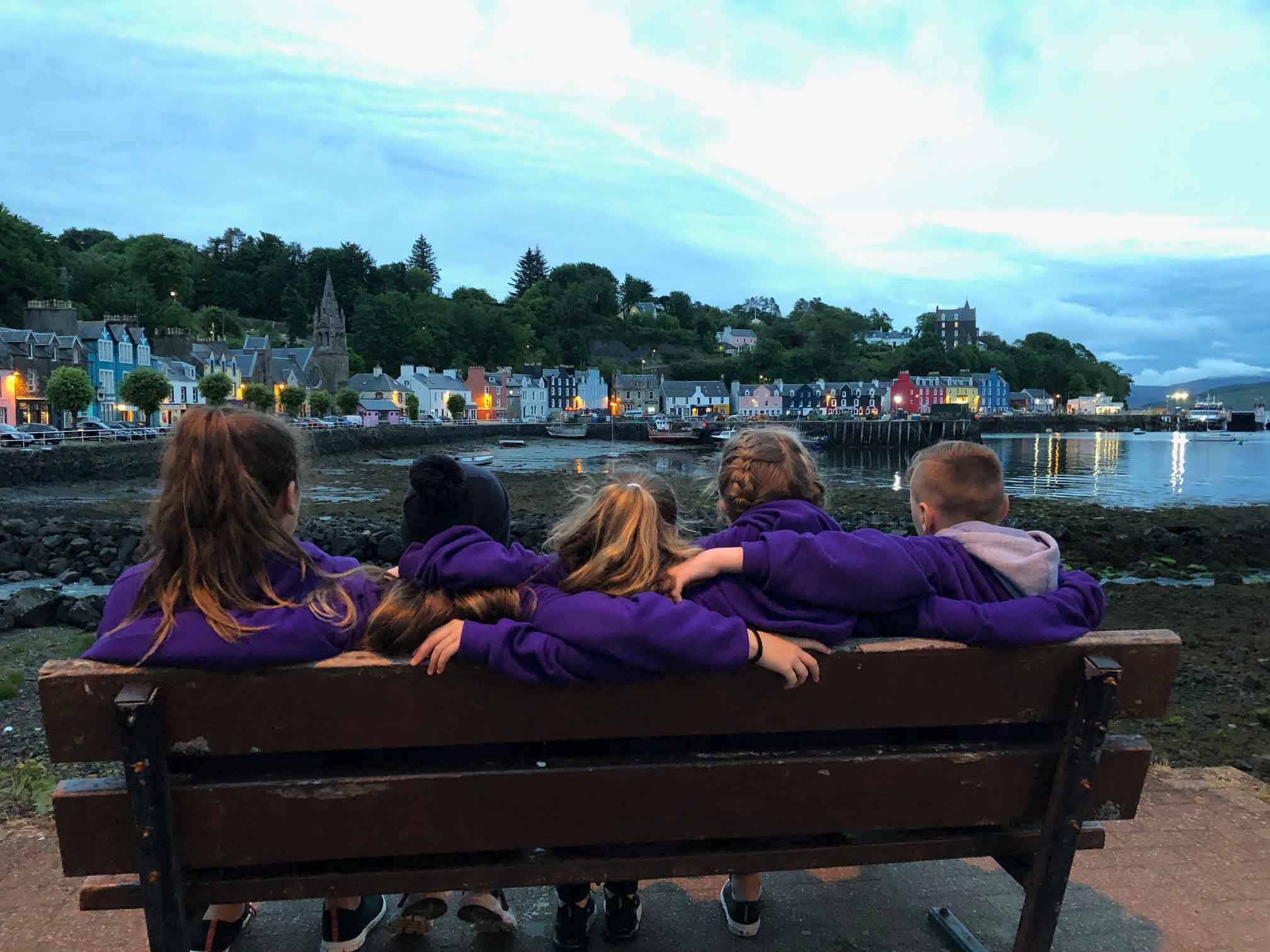 Thank you Cal Mac for your ongoing support!