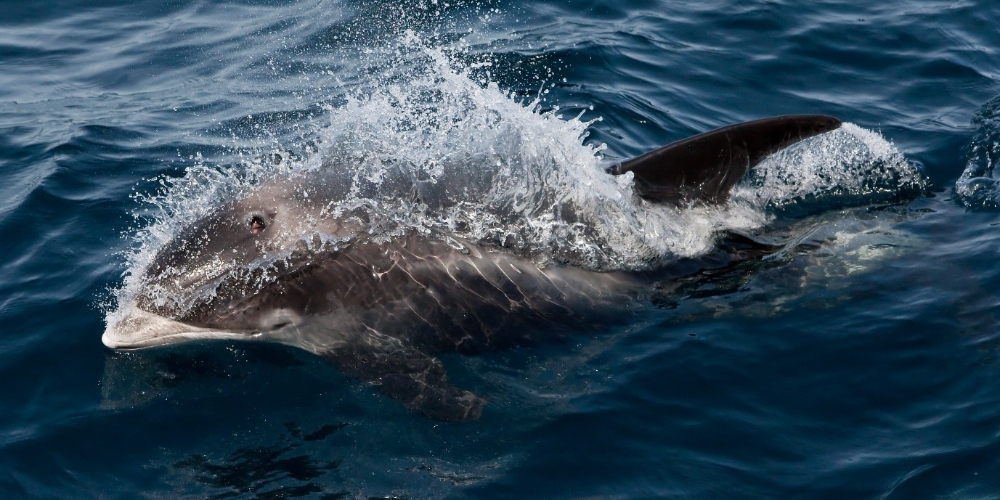 Here is another species fact file in the fact file series and today we're looking at the white-beaked dolphin (scientific name: Lagenorhynchus albirostris). As the Hebrides Wildlife Officer, I am looking forward to seeing this subpolar species this summer as I have not yet seen them; however, I have seen its cousin, the Atlantic white-sided dolphin (scientific name: Lagenorhynchus acutus). I saw Atlantic white-sided dolphin across the pond in the west Atlantic as I was leaving the Gulf of St. Lawrence, there were approximately 500 individuals seen in just a few hours and were exhibiting feeding behaviour. I digress!

Now, this fact file is going to contain some science terminology, I'll explain everything but if there is anything you don't understand please contact me or ask me when you see me out on deck. I'd love to hear your questions and comments!

From 2018, the white-beaked dolphin was listed as Least Concern (LC) by the International Union for Conservation of Nature (IUCN), who assess endangered status for flora and fauna worldwide. This is due to the fact there have been no reported population declines or major range-wide threats identified, they have been categorised as LC since 2008; however, the assessment did highlight research areas that needed more work. These were; population size, distribution & trends, harvest, use & livelihoods and threats, more specifically bycatch. It is also worth mentioning that white-beaked dolphins are listed on Appendix II of the Convention on International Trade in Endangered Species (CITES) which means the species are not necessarily now threatened with extinction but may become so unless trade is closely controlled. All in all, it looks like there should be more research and monitoring for this species, but how do we do that?

Currently, the worldwide population is unknown; however, there are 'stock' assessments within their range, a stock refers to the specific population(s) within a given range e.g. North Sea stock. As a subpolar species, white-beaked dolphins are found in colder temperate waters throughout the North Atlantic Ocean. Their range includes the waters of eastern North America, northern Europe, Scandinavia, Greenland, the United Kingdom, and the Barents Sea. In the North Sea this species is endemic, meaning it is native and has an estimated population of around 36,000 individuals.

The distribution of this species varies with the seasons, but they prefer waters less than 650 feet (ca. 198 m) deep. Most white-beaked dolphins move south and farther offshore during the winter months. They then return north and closer to shore during the warmer summer months. This makes it easy for me as the Hebrides Wildlife Officer and our Marine Mammal Surveyors, as surveys often operate in the summer months, due to better weather and visibility conditions. The surveys are usually created from standardized and systematic methods both on vessels and in the air (these are conducted by SCANS), with recorded animal densities estimated across study areas. This means that surveyors, whether at-sea or in the air can enjoy the weather and spot white-beaked dolphins in our waters.

With the data we collect on our surveys we can extrapolate population abundance and distributions and as we have been collecting data since 1995 we can look at trends. Below shows a population distribution map that was published in 2019 using data from 1980-2018 (Waggitt et al., 2019), in which ORCA data were included. By mapping the distribution, informed monitoring decisions can be made in-keeping with the conservation of the species. Recently, concerns have been raised regarding increasing water temperatures as a result of climate change, which could result in a decline in population numbers in certain areas of the white-beaked dolphin's range. As we have a long-term dataset this can be monitored year on year, with any changes being evident in our analysis. The partnership we have with CalMac is extremely important as the data collection we complete in the Hebrides is vital in adding to our existing database and plugging the gaps in areas that have, previously, had less survey coverage. 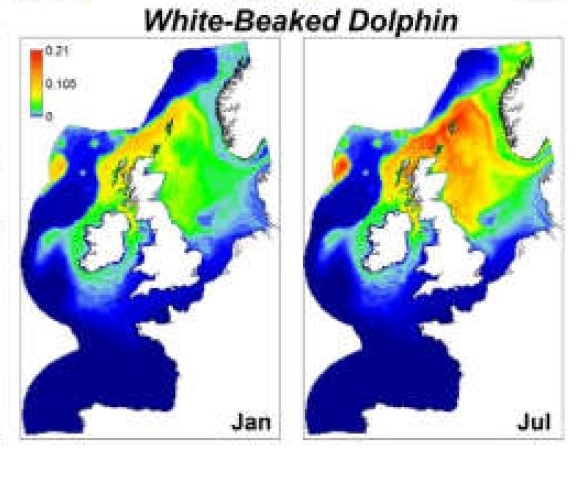 Phew! That's the science over. I hope you enjoyed this blog in the fact file series and if you have any questions or comments please get in touch at hebrides@orcaweb.org.uk or on Twitter via @CalMacFerries or @Orca_web. Let me know if you have a particular favourite species and I can include that in the series!